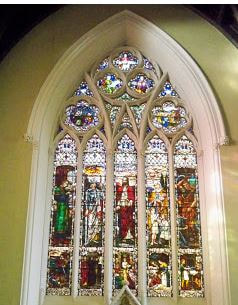 Joseph Wilson of Philadelphia – Will dated 13th February 1809, was buried at St Mary's 2 May 1809.
He owned considerable property in the City of Philadelphia adjoining the River Delaware and also
owned estates in Armagh.  A personal friend and Aid-de-Camp to General George Washington, the first
President of the United States of America during the War of Independence.  He was appointed Consul
for the United States in Dublin on the 19th May 1794 by patent signed by George Washington.

1          Thomas Wilson of Temple Street son of the above Joseph and brother of Robert is thought to have
built Westbury in Stillorgan on the site of an older house.  He was senior partner in Joseph Wilson, Son,
and Co., General merchants, North Wall and Commercial Buildings, Dublin.  He was appointed as US
Consul to Dublin in 1827.  Thomas was a member of the Ouzel Galley Society, a trustee of the Royal
Exchange, a director of the National Assurance Company of Ireland, and a governor of Sir Patrick Dun’s
Hospital.  He served as a director and Governor of the Bank of Ireland at various times.  He was
elected a life member of the Dublin Society.  Thomas married firstly Margaret Stevelly only daughter
of Robert Steveley of Great Charles Street at St George's Church on 21.07.1817.   Mary died age 26 at
Clifton near Bristol just five years later on 10 Aug 1822, she was buried at St Mary's graveyard and
there is a memorial in St Mary's church.  Thomas died on 5.10.1857 age 69 at Westbury and he was also
buried at St Mary's Church.  His Will is dated 15th April 1857 and it was reported that he left  personal
estate valued at 450K pounds.  He was a member of the Strand Street congregation and bequeathed
£2,330 towards building a new church.  A site was purchased on St Stephen's Green and the Unitarian
Church built.  A memorial window to Thomas Wilson was dedicated on 23 Jun 1918, the work was
​            carried out by Sarah Purser to a design by A E Child.