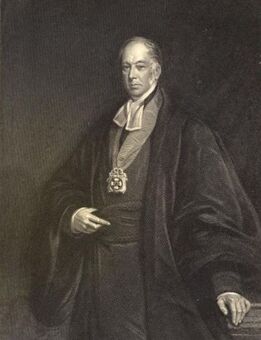 Richard Whately was appointed Archbishop of Dublin in 1831 and Redesdale became his country home.
He lived in Stillorgan for 28 years, attended Stillorgan church and frequently officiated.  He left 40,000 in
his Will, the equivalent of about four million today.  A stained glass window was erected in his memory in
Stillorgan Church.  The window fell into disrepair and was removed in 1934.  Nothing survives of it,
save a description.

St John recording the revelation "Blessed are the dead that die in the Lord"  At either side are
representations of the four cardinal acts of mercy - feeding the hungry, giving drink to the thirsty,
clothing the naked and visiting the sick.  The upper part of the window contains a goup representing the
Ascention of the Savior in presence of his disciples.

Whately is credited by the botanist David Moore of the Glasnevin Botanical Gardens of growing mistletoe
(Viscum album) plants in Ireland from seed circa 1855.

His wife Elizabeth was one of the instigators of "Dublin by lamplight" a charity “for penitent females”, she also
started a school in Kilmacud to educated the poor of the parish, but after the local priest discovered that she
was reading the bible to them, he demanded that Roman Catholic children be removed.  She was also a
founder member of The Bird's Nest Childrens home in Dun Laoghaire along with her daughter Blanche who
came up with name.  The building on York road is dedicated to them both.   Richard died on 8 Oct 1863 at
Roebuck Hall and his remains were taken to the Palace at Stephen's Green.  After some deliberation it was
settled that he would be buried at Christ Church Cathedral.  Upwards of 200 carraiges followed the hearse,
including eight mourning carriages.  The Chapters and choir from St Patricks took part in the service.   It was
​noted that a large number of presbyterians and Roman Catholics attended the service.

1            Elizabeth Jane Whately eldest daughter baptised 07.07.1822 at St Mary the Virgin, Oxford.  Elizabeth
was involved with the Irish Church Mission Society and took over the household duties on the death of
her mother.  In 1852 she published A Selection of English Synonyms and following the death of her father,
she moved back to England and published Life and correspondence of Richard Whately, D.D., late
Archbishop of Dublin.  Elizabeth died on 19.02.1893 aged 70 years at Brunswick House, St Peter’s Port,
Guernsey.