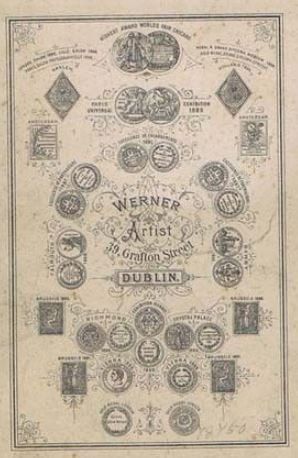 
Louis Werner born in 4 Jun 1824 Valentin Werner and Christine Wetzel at Bernwiller, Alsace.  He attended
the College d'Altkirch at the age of 15, where he received instruction from Charles Goutzwiller.  He was a
portrait painter and moved to London in 1853.  It was from London that he wrote to his sister 'I'm starting
to see that I did very well to come to London.  Although so far I have not worked very hard, all the costs are
caught up and I am sure to stay here for a while.  I have many orders and am infinitely better paid than in
France.'  He travelled between Ireland, Wales and England where he was commissioned to produce many
portraits and settled circa 1854 in Dublin.

He exhibited regularly at the Royal Hibernian Academy in Dublin and with his wife Augustine, he ran a
photographic studio at 15 Leinster Street from 1864 to 1885.  Their son Alfred took over in 1886 and the
business moved to 39a Grafton Street.  Trading as Alfred Werner and Son in 1909, it continued trading until
1923.

1               Louis Joseph Valentine Werner eldest son born circa 1858 at 190 Great Brunswick Street.  He
graduated MB from Trinity College and married Marie Louise Girardin, younger daughter of
late Joseph Garardin of Paris on 03.07.1888 at Zion Church, Rathgar.  Louis qualified from
Medical School in 1884 and practised ophthalmology in the Eye and Ear Hospital.  By 1917 with
the advent of the Great War Dr Louis Werner together with Dr John Benjamin Storey, Dr Herbert
Mooney, and Dr Harris Tompkin started their own meetings, and became the Irish
Ophthalmological Society in 1918.  Louis died 25.11.1936 aged 78 years at Merrion Nursing Home
and was buried at Deansgrange.  Louisa died 31.05.1939 aged 75 years at Glengyle, Zion Road,
Rathgar and was buried with her husband.

2          Louis Emil Joseph Werner born 02.05.1901 at 31 Merrion Square.  Louis like his father was a
well known ophthalmologist and married Marion (Marie) Boyd Auld on 14.09.1926 eldest
daughter of Matthew Boyd Auld of Craigend, Troon, Ayrshire at Troon.  Marie died 29.01.1949
aged 52 years at Farmleigh, Stillorgan.  Louis Werner married Patricia June MacGillycuddy
daughter of Anthony John MacGillycuddy of Killarney and widow of Captain George
Cordy-Simpson on 12.10.1950.  Louis died 06.03.1991 at Newtown Park Nursing Home and was
buried at Deansgrange.  Patricia died at Foxrock and was buried with her husband.  Louis had
a daughter by his first marriage and a son by his second marriage who was born at Farmleigh.