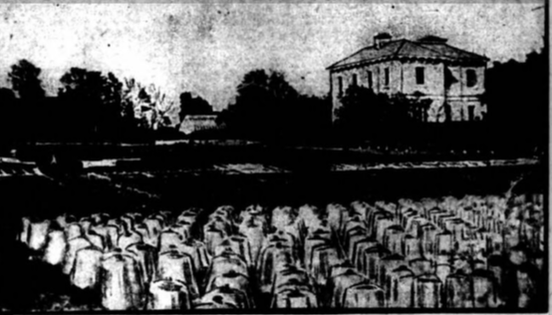 The Wells-Bladen family of Hazelwood

William Bladen son of William and Mary Anne Bladen married Edith Mary Bladen, daughter
of Charles Bladen of Glasgow,  and his cousin.  William was born in Wolverhampton but
moved to Hanley when his father got a job in the 1850’s with the Sheldon Bar Iron works (a
forerunner of British Steel).  He was educated at Mr Osmond’s school at Sheldon before
taking a job with Pease Brothers.  He was a colliery agent and private secretary to Charles
J Homer of Chatterley Collieries.  William was secretary of the North Sheffield Field Club
from 1898 until 1915 and its president from 1895.  The field club was a naturalist club with
sections for Meteorology, Geology, Zoology and Archaeology as well as having a sketching
division.  Edith was also a member of the Field Club, her role was arranging outings and
excursions and she also sketched.   William was a churchwarden of Christ Church in Stone,
Secretary of the local Nursing Association and an associate of the Young Men’s Friendly
Society.  Edith died in 1904 and William died 12 Apr 1917.

1                William Charles Kenneth (Ken) Wells-Bladen, eldest son born circa October 1879 at
Stone, Staffordshire.  He was a steel works assistant when he married Mary
Brennand, who was born in the British Colony of Singapore.  Mary was the daughter
of James Brennand and Sophia Little.  They married at Balrothery, Co Dublin on
28 Aug 1907.
​
The couple moved to Hazelwood house on the Upper Kilmacud Road and in 1909
William got caught up in the French Gardening Craze.  This was a system of mass
intensive crop growing where vegetables and fruit were grown under glass domes
known as cloches.  There was nothing new in this method, gardeners had used this
method for years, what was new was using the system on a commercial scale in a
bid to produce fruit and vegetables out of season or a least before conventional
growers could produce it, as early vegetables commanded a higher price.

Books like Gold producing soil were published and advertised.  Claims and false
promises that the scheme could offer a return of £500-600 per acre were expounded
by the media of the day and it seized the public imagination.  The scheme was
portrayed by the newspapers as a way of making big money and some in Ireland fell
prey but the majority of victims were in England.  The only people to benefit were the
auctioneers who used it as a selling point for small holdings which were difficult to
lease or the companies like Pilkingtons who produced the glass domes.

Set-up costs were enormous and in reading the fine print, it seems that there
was no profit to be made in the first 2 years.  Huge quantities of horse manure
and water were required, equipment costs were enormous and labour was
intensive as each dome had to be nursed.  Ken devoted 2 acres to the French
garden and had to bore a well and add a tank that would hold 1200 gallons of
water.  Set-up costs of 5K per acre were not unusual.

The garden was put up for sale along with all the equipment in 1912.  It included
1300 glass bell domes, 3000 canes, 450 lights and glass frames made from deal,
500 French mats, even their dog, an 18 month old terrier was included in the
inventory.  Two other known French gardens in Dublin ran into financial difficulty;
St Gatien's French farm in Rathfarnham and a French garden owned by Kathleen
Murphy at Drimnagh.  Ms Murphy went bankrupt in 1914 owing nearly 7K, and
St Gatiens was sold and later became a training garden for lady students.  It would
have cost Ken in the region of 2.5K in the UK for equipment originally without
including shipping costs.