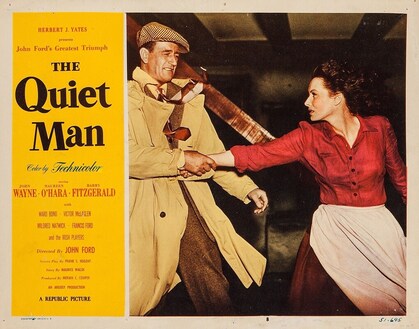 John Walsh born circa 1849, son of Maurice Walsh, a farmer married Elizabeth Buckley daughter of
Timothy Buckley, farmer at Ballydonohue on 17 Apr 1875.  They had ten children of whom eight
were still alive in 1911.

3            Maurice Walsh eldest son and third child born 2 May 1879 at Ballydonohue joined the civil
service and was appointed an excise officer in Scotland mainly to the distilleries.  He married
Caroline Isobel Thompson Begg daughter of Alexander S and Mary J Begg of Baniffshire on
5 Aug 1908 at Dufftown, Aberdeen.  After the free state was formed Maurice transferred to
the civil service of the newly established Irish Free.  His literary career started in the mid
1920’s.  ‘The quiet man’, a short story, was published in the Saturday Evening Post of
11 Feb 1933, where it was read by the Irish-American film director John Ford, who acquired
the film rights in 1936.  Ford's celebrated film The quiet man, shot mainly in Cong, Co. Mayo,
was produced in 1952, starring John Wayne and Maureen O'Hara.

Caroline died at Ard Na Glaise on 10 Jan 1941 and Maurice died 18 Feb 1964 at Ard na Glaise
and was buried at Esker cemetery, Lucan.  In 2002 the papers of Maurice Walsh were
​              purchased by the University of Limerick and are available to view in their Literary Archive.