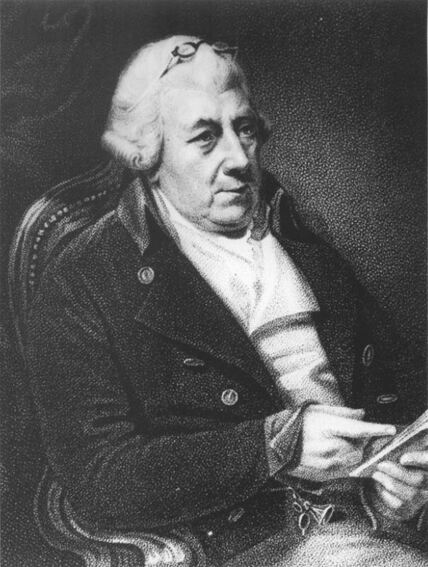 Charles Vallancey - His portrait used as the frontispiece in Vol 4 of Collectanea.
Vallancey Family of Pembroke Lodge

Charles Vallancey born circa 1725 was based in Gibraltar in 1750.  According to himself he was the
son of Le Brun de Valancia and was born in Flanders but as a young child was sent to England and
educated at Eton.  He married Mary and was in Cork by 1754.  Mary died 12 Jul 1760 at Mallow, Cork.

1           George Preston Vallancey born circa 1747 possibly in Gibraltar entered the army and fought
in the American war of Independence and became a Major of Brigade.  He married Margaret
England in 1786.  He was aid-de-camp to General David Dundas.  Margaret died 1789.

2          Frances Vallancey, second daughter born 21 Jul 1788 in the Parish of St James and went
to live with her grandfather at Lower Mount Street after the death of her father.  Frances
died in Cheltenham on 7 Jan 1862.  Her sister Margaret was her executrix.

3          Richard Vallancey born 1789 joined the army and in 1833 was in command of the Revenue
Police in Gort.  He attained the rank of Captain with the 1st Royal Regiment.

5             William Henry Vallancey baptised  April 1836 at Killaloe.  He was stationed at
Letterkenny and transferred to Drumlisk, Co Longford in 1862.  He married Annie
Shaw of Kingstown, eldest daughter of William Thomas Shaw of Shawbrook Co
Longford, on 10 May 1864 at Monkstown Church, Co Dublin.  He was an inspector of
Police (RIC).

George secondly married Isabella Humpreys, daughter of Richard Humphreys on 4 Dec 1792 at St
Pauls.  He published Discipline of a regiment of Militia in 1793.  George died at the  barracks of the
King's Own Militia, New Windsor, Berkshire, England on 20 Dec 1809 aged 63 and was buried at
Windsor.  Isabella died in 1848.

1           Charles Vallancey Pratt born in 1789 was educated at Trinity and was a topographical
artist/map maker.

1          Charles Vallancey Pratt  born circa 1831 married Mary O'Flaherty in Lurgan on
6 Oct 1881 Charles and Mary were then living at Seafort, Oranmore, Co. Galway.
Charles died at Waterloo Road on 21 Jul 1907 and was buried at Mount Jerome.

7            Letitia Vallancey married William O’Brien Drury in July 1783 in the diocese of Cloyne.  Born in
1754 William was a senior officer of the British Royal Navy during the Napoleonic Wars and
attained the rank of Rear Admiral.  He was born in County Cork son of Edward Drury and Ann
Maule.   William died 6 Mar 1811.


Charles of Blackrock secondly married Julia Ann (Julie Jeanne) Blosset, of Monkstown daughter of
Colonel Paul de Blosset on 15 Nov 1765.  He was Major of Engineers in 1761 at Charles Fort and in
1762 he  bought land with a new house from Viscount Fitzwilliam (near the avenue gate leading from
Blackrock to Merrion).  In 1763 the Queens bridge was built to Vallancey's design and in June 1766, Charles
was made Director of Engineers and was given the rank of Major of Foot.  He was granted 100L for
executing a military map by the Marquis of Kildare in 1773 and  Julia died 18 Dec 1783 and was buried at
the Huguenot Cemetery (The Green).  By 1769 he had moved into Dublin city , leasing his Blackrock land
to Christopher Deey and by 1774 he was living at Cumberland Street.  In 1770 he prepared maps for
Lord Townsend and is thought to have offered a design for what is now O’Connell bridge.  In 1780 he was
at Prospect House in Miltown (now called the Old House).  In 1781 he was in Waterford strengthening the
Harbour with order to proceed to Cork to do same there.  Julia his wife is thought to have been too old to
have any children but his youngest daugter would seem to have been born during the time of their
marriage.  By 1790 he was working at Spike Island.

10             Catherine Vallancey youngest daughter born circa 1774 married Thomas Lysaght junior on
12 Oct 1799.  The marriage was performed by Rev Dr Kearney, Provost of Trinity.  Thomas was a
solicitor of County Clare and Leeson Street.  Thomas died circa 1830 and Catherine died at Bay
View near Kilrush on 5 Jan 1848 aged 74.

4        Charlotte Lysaght, fourth daughter married George Davoran, second son of the late Basil
Davoran, solicitor at Kilrush Church in August 1842.
​
Charles thirdly married Catherine.  In 1786 he was appointed to Board of Kingstown Harbour and by this
time had attained the rank of Colonel.   In later years he considered himself an authority on Irish antiquities and
published many of on these including:-
​
Collectanea de Rebus Hibernicis, 6 vols., between 1770 and 1804;
Essay on the Irish Language, 1772;
Grammar of the Irish Language, 1773;
Vindication of the Ancient Kingdom of Ireland, 1786;
Ancient History of Ireland proved from the Sanscrit Books, 1797;
Prospectus of a Dictionary of the Aire Coti or Antient Irish, 1802.

Vallancey had many theories about the ancient races of Ireland.  One of these conjectures (or to some) wild
notions, was that the round towers of Ireland were actually fire towers and that the druids had danced around
them.  He was lambasted and sneered at for being a visionary and theorist but by virtue of his research, he
managed to save a lot of old manuscripts.  He also made copies of the Down survey, which he found in a library in
France, which took him five months.  The Irish copy was partially burned and the only other known version had
been sent to England by William Petty.  The ship is was transported on was commandeered by the French.
He studied the Irish language and theorised that it was the same language used by the Estrusrians (who are
supposed to have emigrated from Phoenicia and the Phoenician language that is thought to have belonged to
the Indo European people as well as the Celts).  Catherine died in February 1799 and was buried in the parish of
St Paul’s on 1 Mar 1799.   The same year he was living at Leeson Street and and was a General in command of Cork
Harbour.

Charles fourthly married Edith Plowman of the Parish of St Peter on  8 Dec 1802.  Edith died on 1 Jan 1809
and was buried at Turant Graveyard in the parish of Dunlavin with her parents George and Comfort
Plowman.  Charles died at Mount Street on 8 Aug 1812 and was buried at St Peter's Churchyard at Aungier Street.
In March 1813 his manuscripts and books were auctioned at the sale room of Thomas Jones of 6 Eustace Street.
Sale items included Snorra Edda, Peder Hansen Resen's Edda Islandorum , Cambrensus Eversus or 'Cambrensis
Overthrown' by 12th century clergyman, Gerald of Wales (1146-1223) or Gerald Di Barri, and manuscripts of
Chichester House detailing ​claims and on the forfeited estates of Ireland.