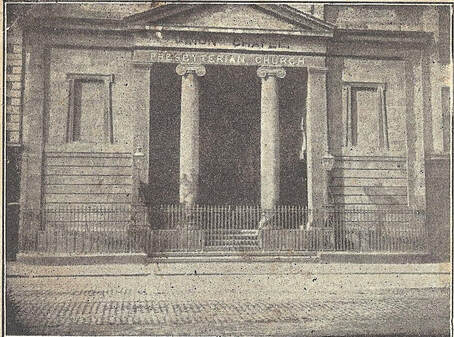 The Union Chapel opened as a place of worship on 16 Feb 1827.  It was built by the Presbyterian congregation of New Mary’s Abbey under the pastoral care of the Rev David Stuart and was known as the Scots’ Church.  The sermon of first Divine Service was preached by Dr Mitchell of Glasgow.  Collections were frequently made to aid in the diminishing of the very large debt incurred in its build.  The lease on their old building at New Mary’s Abbey (which could accommodate 500) was for put up for sale from 1830 – 1832 and was purchased by a Jewish congregation.  The Rev Stuart held the lease on Union Chapel, it was worth 145L pa and was put up for sale through the Encumbered Courts in 1862 after his death. The Rev S G Morrison was his successor followed by the Rev William Tait in 1881.  Rev John Stewart was the next followed by The Rev James J Macaulay was the preacher when the chapel was burned in the Rebellion of 1916.  The congregation merged with another Presbyterian congregation in 1918 now known as Abbey Presbyterian and their meetings were held in Parnell Square now known as Abbey Presbyterian Church, Parnell Square, aka Findlaters Church.