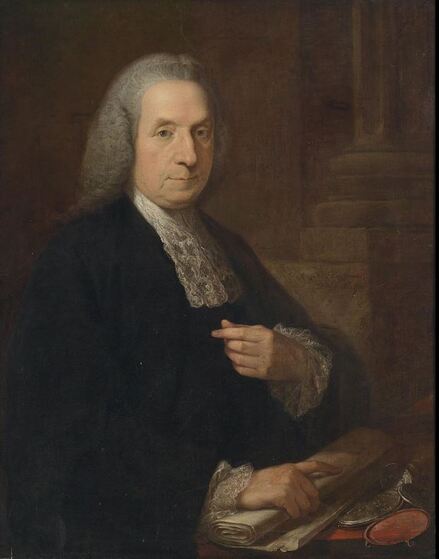 1                 Philip Tisdall baptised St Mary’s 1 Mar 1703 was son and heir of Richard
Tisdall of Dublin, he was also the grandson of Dr William Tisdall whose account
of the trial of eight reputed witches at Carrickfergus in 1711, was published.
Philip attended Thomas Sheridan’s School in Capel Street. He graduated Trinity
BA in 1722, entered Middle Temple in 1723 and was called to the Irish Bar in 1733.

He married Mary Singleton, daughter of Rowland Singleton in 1736.  He was MP for
the University of Dublin from 1739 and MP for Armagh from 1776 to 1777.  He was
Principal Secretary of State and appointed to the Privy Council in 1764.   He
became Attorney General for Ireland in 1760.  His town house was 6 Leinster Street,
which is spent £1500 on improvements. It is thought that John and Patrick Wall,
Stuccodores carried out some of the work. They lived at Stillorgan House from 1754
to 1777 and were  generous and hospitable hosts.  The couple were regular visitors
to Bath in England and Spa in Germany.  Mary was a patron of the artist Angelica
Kauffman.  Philip died at Spa on 11 Sep 1777 from inflammation of the bowels and
was interred at the family vault in Finglas on 3 Oct 1777.  His Will was proved in 1784,
he left 100 guineas each to both his granddaughter and his brother Thomas for the
purchase of a ring and his snuff box with an enamel painting of his wife was left to
Francis Leigh.  He left all his books to Chief Justice Patterson apart from the English
and French books which he thought his wife and daughter might like to choose from.
His executors were his brother in law Francis Leigh (married to his wife’s sister
Patience) and his friend Chief Manus Patterson were left his estate by which to
provide for his wife as they saw fit.

When the contents of Stillorgan house went for sale in 1777 it included 24 beds and 2
dining tables with seating for 20 and 16 and a fire engine.  The paintings the family
commissioned from Angelica Kauffman of the family and paintings of the house by
Gabriele Ricciardelli were sold when 6 Leinster Street was sold in 1783.  One of these
paintings was subsequently sold by Christies in 2012 ‘A prospect of Stillorgan Park and
Obelisk, with Dublin and Harbour beyond’ for 33K sterling.  Mary moved to
Monkstown after the death of her husband.