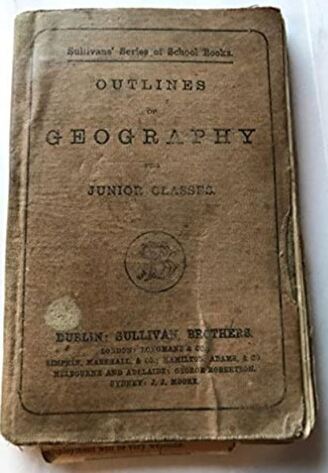 Daniel Sullivan born circa 1763 married Mary McClement circa 1800.  He fought in the Battle of
Trafalgar, he was on the 74 Gun Ship The Conqueror.  A tax collector of Hollywood, County Down he
died 4 Oct 1852 aged 89.
​
1           Dr Robert Joseph Sullivan 2nd son born circa 1803 at Hollywood co Down.  He graduated BA from
Trinity in 1829 and married Frances McCabe of Lilac Lodge, Kilcock on the 18 Aug 1829 at St Paul’s
Church.  He was appointed to the office of the National Board of Education.  He was the author
of many educational books on Geography, spelling, literary class and a dictionary of the English
language was reprinted numerous times. Sworn in as a barrister in 1838 but never held a brief.  He
was appointed professor at the training college in Marlborough Street, Dublin the same year.  He
endowed a school in Hollywood in 1859.  Frances Teresa died 28 Aug 1866 at Kingstown.  Robert
secondly married Lucinda Brady, daughter of W E Brady at Monkstown Parish Church on
22 Dec 1865.  Neither marriage produced any children.  He died 11 Jul 1868 at 21 Clarinda Park
West, Kingstown and was interred at Hollywood.  He Left 45K in personal estate.

2           Daniel Sullivan born 24 May 1832 was a partner in Sullivan Bros founded in 1855  to
publish the books of his uncle Richard Sullivan.  They also supplied stationery and made
school furniture.  He was the brother of Marcus Clement Sullivan.  He was living at 27
Marlborough Street and married Eliza Carleton McDowell on 26 Dec 1863 at St Mary’s
Church.  Eliza was the daughter of Hugh McDowell, cabinet maker of 52 Mary Street.  They
lived at Pembroke House, Mount Merrion Avenue from 1870 to 1882 and at Janeville,
Stillorgan from 1883 until 1893.  They changed the name of the house to Glen Albyn and
during this time Daniel won prises for Jersey cows and Eliza won prizes for their butter.
Daniel was people’s church warden for Stillorgan in 1885.  The firm merged with Messrs A
Thom’s & Co in 1890.  He died 25 Dec 1895 age 63 at 5 Rostrevor Terrace, Orwell Road,
Rathgar and was buried at Mount Jerome.  He left 12K in personal estate.  Eliza died
26 Nov 1902 at Rostrevor Terrace and left 1K in personal estate.

3           Marcus Clement Sullivan, born circa 1835 was a skilled bookbinder and was the nephew of Dr
Robert Sullivan, of the National Board of Education.  He trained in London and Belfast and at
his brother’s factory.  He was a partner in the publishing firm of Sullivan Bros of 27 Marlborough
Street.  He was living at 27 Marlborough Street when he married Charlotte Jackson on
1 Aug 1860 at St Peter’s Church, Dublin.  Charlotte was the daughter of Thomas Jackson, a painter
of 33 Cullenswood Avenue and his wife Margaret Lewis.  He put his residence Castlefield,
Knocklyon Road up for sale in 1885.  He was the last surviving partner of Sullivan Bros,
Educational Publisher and Book seller of Dublin who produced the Emerald learners and the
Sullivan Readers Series.  They had 11 children of whom 6 survived in 1911.  Marcus died
5 Apr 1902 aged 67 at Highfield Road, Rathgar and left 9k in personal estate.  Charlotte died
9 Apr 1912 aged 71 at Highfield Road and left 15K in personal estate.  Samuel Jackson &
Kathleen Brunker were her executors.

1           Edward Stewart Sullivan born 2 Jan 1865 at 38 Cullenswood Avenue married Lucy of
California on 2 Oct 1889.  They lived at Ballinakill, Rathdrum and Edward were a farmer/
Agriculturalist.  Three of their five children were born in Washington, USA.

6           Kathleen Sullivan born circa 1878 married Alfred Arthur Brunker, MPSI, an analytical on
19 Aug 1905 at Zion Church, Rathgar.  Arthur was living at Grosvenor Square and was the
son of son of James Edward Brunker, MPSI.  In 1911 they were living at Windsor Road
Rathgar and had no children.

*Nephew of Dr Robert Sullivan, of the National Board of Education but unable to prove he is a
brother of Marcus and Daniel.