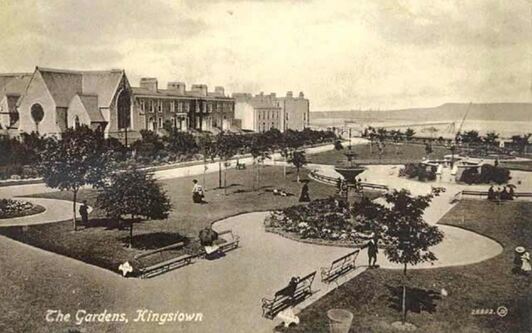 George Strype baptised 18 Aug 1814 Chalton, Hampshire son of George and Elizabeth Strype.  George
married Elizabeth Broadbent at Childwall, Liverpool on 24 May 1839.  He was a Civil Engineer and
moved to Belfast as manager of John Rowan & Son, York Street Foundry circa 1850.  He designed the
monument to John Rowan (steam coach inventor) installed in Doagh in 1860.
​
By 1861 he was manager and partner in the firm of Thomas Grendon & Co, Mechanical Engineers and
Ironfounders, of Drogheda.  He was a member of the Institution Civil Engineers Ireland and when
Grendons built two small steamers for the Grand Canal Company to test the viability of converting
from horse to steam, George steamed to up to Dublin on one of the newly finished boats.  This
partnership was dissolved in 1867.  George died at Newtown Cottage, Drogheda on 14 Jul 1868 and was
buried at St Mary’s graveyard in Drogheda.  His burial was disrupted when a tomb stone was uncovered
in the process which had various symbols and suggested it was the burial place of a Roman Catholic
dignitary.  The military were called in to disperse the crowd and he was buried later in the day in a new
plot in the graveyard.  Elizabeth died at Bayside on 2 Sep 1871 and was buried at St Marys.

3                   Margaret Mary (Maggie) Strype baptised at St Peter’s, Liverpool on 28 Dec 1843.  She was
living with her sisters in Adelaide Road in 1901 and living at Gilford Road in Sandymount
in 1911.  Margaret died at Baggot Street Hospital on 14 May 1933 and was buried at
Mount Jerome with funds provided for by the Association for Relief of Distressed
Protestants.

4                   William George Strype baptised 8 Feb 1847 at Liverpool married Mary smith, daughter of
Thompson Smith at Hexham, Northumberland in 1875.  William Strype succeeded his father
as manager of Grendon & Co.  In 1867, while still serving his apprenticeship, he passed the
Indian Public Works Department examination, and was posted to the civil engineering staff
for the Harbour Works at Bombay but returned after a year and took a job at A Guinness
and Company.  He set up his own practice in 1876.  It was announced that he had designed
and superintended the construction of the equatorial mounting for a 3-foot telescope for the
fourth Earl of Rosse in 1878, but this was contradicted by William Spence of the Cork Street
Foundry who declared that it was he who had designed and built it.

William was mainly involved in drainage and water schemes and as the township’s surveyor
he was Involved in the design of a public park at Kingstown opened in 1890 (now known as
the People’s Park in Dún Laoghaire).  It was also the engineer for the new breakwater and
harbour in Wicklow.  They moved from Sydenham road in 1877 to Littleton in Stillorgan where
they lived until 1883.  In 1877 he was a director of the Dublin and Wicklow Manure Company
based at The Murrough.  Mary died at Melrose Cross Avenue on 13 Nov 1895 aged 52 and was
buried at Deansgrange.  William secondly married Eleanor Annie de Cram on 15 Sep 1897 at
Saint George, Hanover Square, Middlesex and divorced later that year.  William died
14 Mar 1898 at 17 Lower Mount Street and was buried with Mary at Deansgrange.  Patrick
Forstall Comber, civil engineer and partner acted at chief mourner.

1          Ethel Strype born 10 Jul 1879 at The Murrough in Co Wicklow was executor for her father
but as she was a minor this task fell to her Aunt Elizabeth.  By 1901 Ethel was living with
her uncle John Ridman in Hexham.  She became a nurse and never married.  She died at
the Queen Alexandra Hospital in Portsmouth on 28 Dec 1956.
​
5                   Elizabeth Amelia born circa 1850 in County Louth was living with her sisters in Adelaide Road in
1901.  She was a professor of Music and Singing and was living at Grove Park, Rathmines in
1911.  Elizabeth died a spinster at the Mageogh Home on Cowper Road on 6 Aug 1925 and was
buried at Mount Jerome.