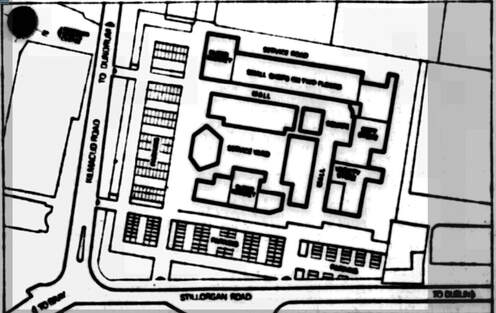 The Stillorgan shopping centre was officially opened by Sean Lemass, former Taoiseach on the 1 Dec 1966.

The developers were MEPC (Ireland) Ltd (Metropolitan Estate and Property Corporation Limited).  They signed
a contract with G & T Crampton the builders in May 1965 and the expected cost was £1 Million.  It was
designed by John Costello, BA, ARIBA, who went to America in March of that year to study American shopping
entres and designed the centre as a complete self-contained unit with 2 traffic-free streets, partially under
cover which led into a central landscaped square.   Parking for 600 cars, a free nursery with a nurse on duty to
care for small children and a restaurant offering meals and snacks were some of the big draws.

Augustus Kennedy Kisch was Chairman and Managing Director of MEPC, which was at this time the third
largest property company in the world having merged with Town Investments, a firm built up by his father.  Its
had assets of 70 Million and revenue approaching 7 million with a presence in England, Canada and South Africa.
other directors included R H Sheppard, SA Dolton and T M Williams.  By July 1966 the opening date had been
pushed out from October to December, but names like Bolgers, Cassidys and Findlaters had already expressed
an interest in being tenants of this one stop shop in what was to be the most modern shopping centre in Europe.

In August 1966 the theme of the sculpture to be erected in the main square was announced as being The Fiddler
of Dooney, created by W B Yeats and MEPC had commissioned German born sculptress Imogen Stuart to carry
out the work.  The five foot creation in beaten copper would also include three dancing children.  Oisin Kelly
designed a six foot fountain for the centre, a series of copper plates, built by Grange Engineering in Bray but it is
not known if this was ever installed.

Augustus was born in England, graduated Cambridge with a honours degree in economics and law and was called
to the bar aged 23.  He specialised in property and planning cases.  He volunteered during WW2 with the Royal
Navy and served on minelayers.  He moved to Ireland in the 1955 and lived at Mount John, Newtownmountkennedy
near Newcastle, County Wicklow, a Georgian House set on 61 acres.  His was a keen yachtsman and kept a
​Bermuda rigged sloop moored at Dun Laoghaire.   His plan was to create something permanent and attractive and
it was to be built with Irish money.  Friends Provident and Century Life were the biggest investors using money
from its life policy funds.   The return on their 1 Million investment was expected to be in the region of 40%.  Before
the contract was signed they already had lettings in place for two anchor grocery stores and the build was expected
to be finished by October 1966.  Osborne King and Megran were the letting agents and the list of reserved spaces
now included Roches Chemist, EBS, Bank of Ireland, Foster Wine Merchants, Doré of Dame Street and Imco.

Construction was underway even before the contact was signed and MEPC had already rehoused or paid
compensation to some of the tenants whose houses were to be demolished.  The site was about 9 acres and there
were 34 cottages to be demolished.  MEPC had commissioned a report from the National Cash Register Company
in March 1964 to look into the potential of the site before buying the site from David Phillips of Ballyfree Farms.
The survey was to ascertain the disposable income of the catchment area (about a 5 mile radius).  It was a detailed
analysis looking at wealth indicators. They looked at the number of cars, the age of cars (at this time 50% of all cars
in Ireland were less than 4 years old).  It took into account spending patterns, it also looked at the amount of
telephones in the area, as those with telephones were likely to have double the incomes of those without.

The major problem faced by MEPC in March 1966 to complete the development, was the rehousing of the
cottagers.  While some had  found alternative accommodation 19 cottages still remained to be demolished on both
the Kilmacud Road and the Dublin Road.  Most of these were lived in by elderly people who had lived there all their
lives and were very distressed by having to leave.  MEPC purchased a 3.5 acres site at Ard Lorain and erected 19
pre fab chalets on the site.  G & T Crampton supervised the build and put in sewers, drains and a gas and
electricity supply.  The chalets were completed in 3½ months despite appalling weather in April 1966 and the
hand-over of keys happened on the 8 Jun 1966.  Dublin Corporation paid MEPC for 6 of the houses and MEPC
paid for the balance.  There were three types of chalets on the site, suitable for either couples, singles or families;
rent started at 6 shillings per week, the most expensive was 33 shilling a week.  The chalets were said to be free
from damp and could be easily heated unlike the 200 years cottages they had been living in.  MEPC sold on the
Ard Lorcain site to Dublin Corporation at cost.

The builders of the shopping centre were G & T Cramptons, a well-established film founded in 1879.  The had a
good track history of delivering on time and on price.  One of their first big contracts was the building of 700
houses for the Dublin Artisans Dwelling Company at Oxmantown Road, Stoneybatter.  They were involved in the
building of some of Dublin’s hospitals and hotels, and even a runway for Baldonnell but they had never worked
on a shopping centre.

The first part plan was to level the site, two giant earthmover were brought in but site works were slow due to
MEPC’s  lack of title on some of the site.  The rubble from the site was moved to Crokes to infill a valley and
level a pitch.  November 1965 to April 1966 was one of the wettest winters in history, drainage problems and
heavy rain turned the site into a quagmire.  The build was way behind schedule and additional manpower and
overtime was the only answer to recoup lost time.  By May 1966 a total of 50 contractors and 400 men were
working on site and concrete was being pumped in and water pumped out daily.  Although the building was only
two storey in height, it was wide and the site was sprawling.  The run of drains and cable ducts was huge and
due to time restraints these now had to be installed simultaneously to the building emerging from the ground.
There was no room for error and a computer was used to work out the critical path analysis on the structural
aspects of the build and keep them on track.  The emblem of The Centre was a stylised S with two coloured
disks designed to fit into the illuminated sign tower.  The design was by Rolf Middelboe a textile designer with
the Kilkenny Design Workshop and executed by Annete Jerside and Jette Bronnum.  It was produced on fabric
to mask the glass in the tower.  The clock, made in stainless steel and black stove enamel was designed by
Costello himself, the architect.  Sixteen enamel steel panels were designed by David M Reeves and produced by
Curran Ltd of Clonmel.  These were then bolted together and mounted in the waiting area.

The 1st of December 1966 was a bright day but rain was threatened and temperatures were set to only reach 3°.
The official opening ceremony was planned for 11:30 when former Taoiseach Sean Lemass would be introduced
by Augustus and declare The Centre open for business.  Mrs Lemass had consented to unveil the sculpture by
Imogen Stuarts and the Very Rev Brendan Hartley was on hand to bless The Centre.  A marquee was set up in
the carpark for 250 guests, in the main people who had been involved in bringing the building to completion.
The impact modelling agency provided the hostesses which included Elaine Ryder who had been crowned Miss
Mod earlier that year, Dickie Rock fresh from his Eurovision win of 1965 was at the ready to sign autographs.  Iris
Lawlor and John McDarby, stars of Tolka Row were also on hand for their adminers.