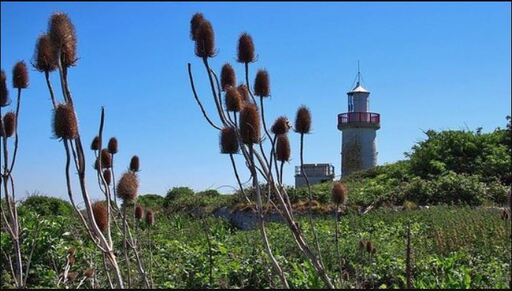 
​Bernard Somers was one of the first Light Keepers on Scattery Island when the Lighthouse started
operating on the 01.12.1872.  He was assisted by his wife Mary.  It is thought that Mary Geary was
his second wife when they married in 1862.  His daughter in law and some of his grandchildren lived at
Altadore on Avoca Avenue from 1930 to 1938.

1             William Somers born circa 1853 married Ellen Walsh daughter of John Walsh, a farmer on
19.09.1880 at the Roman Catholic Chapel of Trinity Without in Waterford.  William a telegraph
engineer died on 12.06.1891 aged 38 years at Rathmore Buildings, Cork.  In 1901 Ellen, a
subpostmistress was living at 127 Whitegate, Cork with her family.  In 1911 the family were
living at Tubbermore Avenue, Dalkey.  The family played a prominent park in the struggle for
independence.  Ellen was dismissed by the British government from her position of postmistress
of Dalkey in 1915 and by 1916 was running a newsagents called The Stationery Shop in Dalkey
with her daughter Elizabeth.  Ellen died on 16.10.1933 aged 78 years at Altadore, Blackrock.
​
1          Elizabeth Nora Somers born circa 14.10.1881 in Waterford.  Elizabeth was Secretary of
the National Agricultural and Development Association from 1917 and had written many
articles on development.   She continually endeavoured to foster existing Irish Industries
and promote new ones.  She was a strong supporter of the Irish Volunteers and secretary
of Cumann na mBan.  Elizabeth died on 28.12.1934 at her home Altadore, Blackrock.

2          John Bernard Somers born circa born 1883 in Waterford living with his grandparents in 1901
was an agent for Castlecomer Collieries.  He worked for the Post Office and was based in
Sligo from 1915 to 1922.  He was living at Altadore when he retired in 1930 citing the unfair
grading system in the Civil Service.  He went forward as a Fianna Fail candidate in the Dublin
elections of 1930 but was eliminated on the 13th count.  Bernard died by his own hand on
12.03.1934 aged 49 years at Westland Row Railway Station.  His funeral was held at St
Andrew's Church in Westland Row and he was buried at Deansgrange.

3          Daniel Charles Somers born 09.05.1887 at 93 Rathmore Buildings, Cork.  For his part in the
1916 Easter Rising Daniel was sentenced to 5 years penal servitude and lost his job in the
Civil Service.  He was elected to Dalkey Ubrban council as a Sinn Fein candidate in 1920.
He regained his civil service job and worked at the Department of Industry and Commerce
and was living at Altadore when he married Catherine Murphy daughter of John Murphy a
commercial traveller of 2 Willow Terrace, Rock Road on 08.06.1933 at the Roman Catholic
Church in Booterstown.  Daniel died on 07.01.1962 aged 74 years at Hillcrest Road, Sandyford
and was buried at Deansgrange.