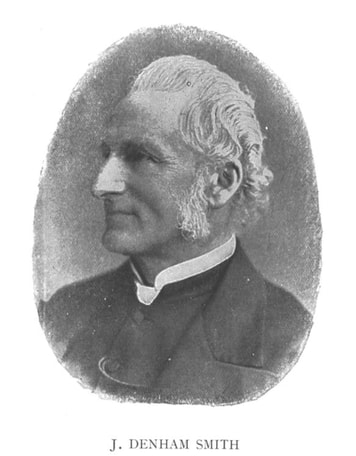 ​Rev Joseph Denham Smith Pastor of the Congregational Church, Newry married Sarah Figgis Gilbart
​only child of late Rev Thomas Gilbart formerly Minister of York Street Chapel, Dublin  They moved to
Kingstown in 1846 and lived at Bellevue, Cross Avenue from 1864 to 1870.  He was author of The
Rhine and The Reformation and A Voice from The Alps or The Vaudois with scenes by the way. His
ministry was very successful, and he became well known as a preacher all over Ireland and in
England.   He travelled on the Continent, other published works include a study of Oliver Cromwell
and  In 1861 he resigned to devote himself to that work of evangelisation and in1863 the enormous
Merrion Hall on Lower Merrion Street Dublin which was built to hold 2,800 people, was opened as a
venue for his non-denominational evangelism.  They moved to London, where Joseph held regular
meetings in St George's Hall and Clapton Hall. He died 05.03.1889.

4             James William Gilbart-Smith Denham born August 1855 at Mosaphir, Kingstown.  James married
Isabel Grace (Grace) Vandeleur daughter of Hector Stewart Vandeleur of Kilrush, Co Clare
02.08.1901 at the Church of the Holy Trinity in Eastbourne. He was a successful poet; one of his
poems, Wake up England sold over 350K copies.  He was a keen cyclist and published a roadbook
of London for cyclists.  He was knighted in 1921, and died 03.10.1927.