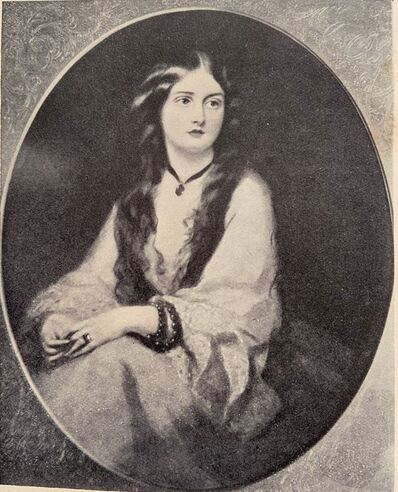 Julius Alexandre (Jules) Sartoris the youngest son of Urban Sartoris, a banker and Matilda
Tunno of Seaux, Paris was baptised in Paris on 22 Nov 1831.  He was living at Hoppesford
Hall, Coventry and held a commission as Captain in the 16th Lancers in 1854.  He resigned
his commission on his marriage to Georgina Alicia Lyster, daughter of Anthony Lyster of
Stillorgan Cottage in Stillorgan Grove on 12 Sep 1854 at St James' Church London.  A second
marriage ceremony was reported as having taken place in Stillorgan Parish Church on
10 Oct 1854 but this is not noted in the Marriage Register.  They moved into Lindon Castle
beside Stillorgan Cottage in 1863.  Julius was certified insane in 1859 and a ward of chancery
after a fall from a horse while hunting in Leicestershire which left his brain compromised.
A happy and gentle person with bouts of bewilderment, he was minded by his family, a
butler and a medic.  He died jumping off the parapet of the tower of Linden Castle.  He
landed on the portico and Doctor Pollock was called.  Jules was hauled back up to the
parapet and died fourteen hours later from a fractured skull.  His death was reported as
suicide by some newspapers but the coroner just called it death from jumping from a roof
while in a state of insanity.  He died 2 Aug 1863 and was buried in the Lees vault at
​Monkstown Church.

Georgina lived between London and Stillorgan Cottage after the death of her husband.
She died aged 91 at Addington House, Winslow, Bucks on 3 Jan 1919.  There is a memorial
to Jules and Georgina at Stillorgan Church.  The couple had three daughters.

1        Florence Caroline Matilde Sartoris eldest daughter born Feb 1856 at Tusmore House,
Oxfordshire, married Lieut Col Edmund Antrobus of the Grenadier Guards, oldest son
of Sir Edmund Antrobus, Bart of Amesbury Abbey, Salisbury at St Peter Church, Eaton
Square on 2 Mar 1886.  Anthony succeeded his father as 4th Bt. of Antrobus and
Florence became known as Lady Antrobus and it was under this title that she
published a 'A Sentimental and Practical Guide to Stonehenge'.  Stonehenge was on land
that the Antrobus family owned, and she was instrumental in keeping it preserved.  She
dedicated the book to her mother.  They had one child.   Edmund died Feb 1915 at
Amesbury Abbey and Florence had to leave the 6400 acre estate as it was entailed, the
heir was her brother in law.  Florence and her mother moved to rented accommodation
in Brighton.  Florence died on 19 Feb 1923 and left 52K in personal estate.

2        Constance Emily Sartoris, second daughter born 20 Jul 1857 married the Hon Claud
Hamilton Vivian, of Plas Gwyn, Isle of Anglesey, fourth son of Lord Vivian and Lady Mary
on 29 Apr 1838 at St George's, Hanover Square.  Claude translated books from Welsh
to English and died at Lowdes Street, the house of his mother in May 1902 aged 54.
Constance died 20 Oct 1905 at Plas Gwyn, Pentraeth, their Anglesea residence.  There
is a memorial to Constance in Stillorgan Parish Church.  The couple had six children.

3         Marjorie Gladys Stuart Erskine born 7 Sep 1880 trained at St Guy's as a hospital nurse
and worked at Great Ormond Street Hospital for a year.  She was engaged to the Hon
Arthur Grenbille Brodrick in 1908 but the engagement was broken off just four weeks
before the marriage date.  She went missing in Scotland where she had gone on a
walking tour in August 1910.  Her body was found some four weeks later on a lonely
hillside, at a golf course at Aviemore, Inverness.  She died from exposure having injured
her ankle.