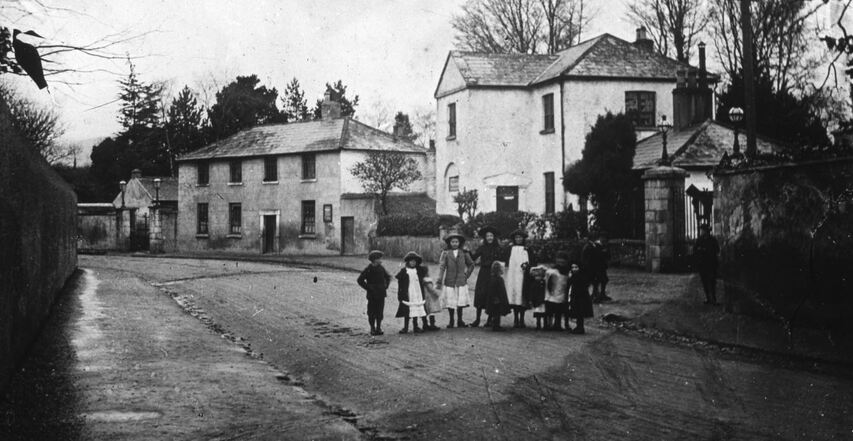 Edward James Sargison born 1845 at Brighton, Sussex joined the  2/12th Regiment of Foot in
Glasgow as 'a lad' in 1859 and was appointed an under age drummer in 1860.  He married
Elizabeth Charlotte (Charlotte) Cook in 1870 at Preston, Lancashire.  He served in the East
Indies and at Charlesfort, Kinsale and in Athlone.  He was discharged unfit for service and
granted a pension in 1875.  He died in 1876.

1            Mary (Minnie) Sargison born 5 May 1871 at Fethard, Co Wexford.  She worked as a
servant at St Margaret's, Donnybrook (now the Teresian School and once called
Donnybrook Cottage).  She married Richard Cooper, the son of Patrick Cooper, a
butler on 7 Feb 1894 at St Mary's Church Donnybrook.  Richard was a gardener
living at Dunstaffnage cottage, Stillorgan.  They moved to Garnaville Cottage on the
Kilmacud Road.  Minnie died 26 Jul 1953 and Richard died 28 Jul 1956 at Garnaville
​              cottage, both are buried at St Brigid's graveyard.

1          Charles Cooper born 22 Dec 1894 at Westbury, Stillorgan married Mary
Mulhall at the Roman Catholic church at Golden Bridge on 6 Aug 1924.  Mary,
daughter of Patrick Mulhall was a ladies maid living in Inchicore but originally
from Stillorgan.

3            Charles Sargison born 14 Sep 1874 at Charlesfort, Kinsale married Jane Anne Deacon on
20 Apr 1897 at New Ross.  Charles was living in Stillorgan by 1894 and by 1896 was sexton of
St Brigid's Church having assisted his uncle,  John Cooke, the previous sexton, for two years.
He was  caretaker of The Dispensary in 1896 but by 1901 he was given notice to quit the
house there, and had declined.  He was on a salary of £4 pa as caretaker and was looking
for an increase.   Charles was Assistant Registrar of Stillorgan and his signature appears on
the birth, marriages and death records for the parish from 1901 to 1907.  He had a very
distinctive legible hand and his work was very accurate.  He had a shop at Grove View in
Stillorgan by 1910, this was located at the bottom of what is now known as The Hill but it was
his wife Jane who ran the shop.

Charles died 9 Jan 1937 at Sallymount Gardens in Ranelagh.  After his death, land he
owned at Kinnagh, Ballycullane was put up for sale by his wife, his son James Joseph
purchased the 28 acre farm.  Jane died on 16 Apr 1966.  Both were buried at Mount
Jerome.

4        Sophia Sargison born 13 Nov 1904 at Church buildings, Stillorgan was entered into
the birth register by her father who was acting as registrar for Stillorgan.  She
married Richard Samuel Simmonds, an electrical engineer at the Methodist Church,
Blackrock on 17 Apr 1928.  Sophia of Grove Stores, Stillorgan died 27 Aug 1934.

Charlotte* secondly married Stephen Vekins, a mariner at Ringcurran Church, Kinsale 28 Feb 1877.
Charlotte ​was the daughter of Charles Cooke, a farmer and was born in Wexford.  Stephen was
resident at Scilly, Ringcurran ​and the son of Daniel Vekins, a fisherman.  Charlotte died 2 Sep 1922
aged 74 at Loughlinstown Hospital late of Gardener's Row, Booterstown and was buried at
Deansgrange.  Her son Charles Sargison made the funeral arrangements.

*Information thanks to K Vekins.