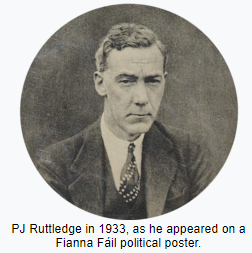 ​Ruttledge family of Bellosquardo/Ardagh Park, Blackrock
​
Patrick James Ruttledge the son of Patrick Ruttledge and Julia Kelly born circa 1892 at Ardagh, near
Ballina, Co Mayo was educated at Muredach’s College and then St Enda’s in Rathfarnham which was
run by Padraig Pearse.  He qualified as a solicitor in 1918 at Trinity College.  During the Irish War of
Independence he was active in the I.R.A. and was a close friend of Sean MacDermott, with whom he
lived for some time.  Patrick a TD for North Mayo married Helena Roddy daughter of Michael Roddy
of 77 Leinster Road in 1928.  He was elected to Dáil Eireann in 1921.  Serving as Minister for Lands &
Fisheries, Minister for Justice and Minister for Local Government resigning in 1941 to become
General Solicitor for Wards of Court.

Patrick purchased the Bellosquardo Estate in 1940 for £400 and renamed the estate as Ardagh Park
possibly after his birthplace.  A horsebreeder and member of the Turf Club Patrick won the Irish
Derby in 1939 with “Mondragon”.

They had four children, including twins, one of whom was Ronan, who died late of Ardagh Park on
​01.02.1959 at Grangegorman.

Ardagh Park was advertised for auction in September 1952 and Modern Homes built the Ardagh
Estate of Detached and Semi Detached Bungalows from 1957.