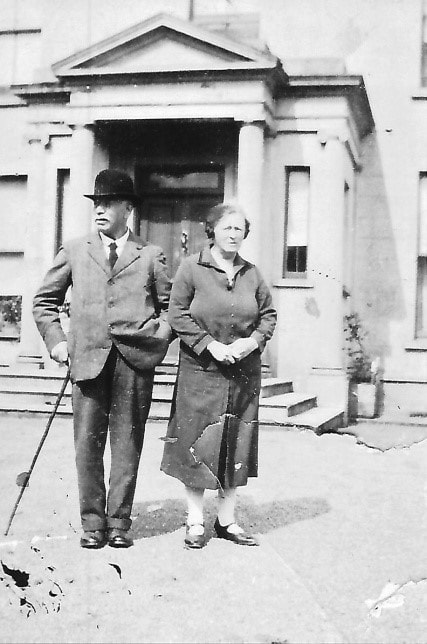 James and Clara O'Reilly at Rockville, Blackrock circa 1920 - Courtesy of Geraldine McQuillan
The O'Reilly family of Rockville, Newtownpark Avenue

James O’Reilly born circa 1865 at Beleek, Co Fermanagh was the son of James O’Reilly, a farmer and
Jane Campbell of Corakeel, Beleek.  He married Margaret Vallely, daughter of the late John Vallely, a
farmer and his wife Mary Gubbins on 29 Feb 1892 at Rathmines Roman Catholic Church.  Margaret
died on 5 May 1906 at 52 Hollybank Road and was buried at Glasnevin.

1                James Arthur (Attie) O’Reilly born circa 1894.  Arthur was living with his Aunt Isabella Vallely in
Limerick in 1901.  He was a commercial traveler and spent his working life in Limerick and
retired to Dun Laoghaire.

James secondly married Clara Miller at Brompton Oratory Kensington in 1908 and moved to
Hollybank Road, Drumcondra.  He worked at Jacksons of 35 Dame Street, hats, boots and outdoor
wear retailers, from 1925 for 38 years and was the Dublin Branch Manager.  Jacksons were famous
for their 3s 9d hats.  James died 13 Sep 1929 aged 64 at Rockville and was buried at Glasnevin.  Clara
died 2 Jun 1963 aged 88 at Rockville.  Her funeral mass was held at John The Baptist Church in
Blackrock and she was buried at Glasnevin.