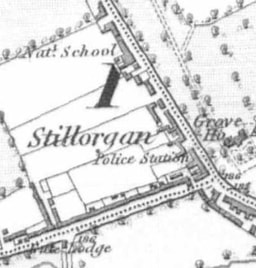 James O’Gorman, born circa 1839 son of Thomas O’Gorman. James was a farmer married and married
Mary Meade, daughter of Thomas Meade, a farmer at Mullogh, Cragaknock RC Church on 24 Apr 1868.
They had eleven children of whom eight survived in 1911.

6              Francis (Frank) O’Gorman born 10 Feb 1877 at Dromin, Craggaknock, Co Clare.  He attended St
Patrick Training College from 1896-1898 and became a teacher.  He married Anastasia Murphy,
daughter of Thomas Murphy, a schoolteacher on 19 Jul 1905 at St Kevin’s Church, Harrington
Road.   Anastasia was living at St Kevin’s Road and Frank was resident at 1 Eglington Terrace in
Donnybrook at the time of their marriage.  Anastasia became a teacher after her marriage and
died 14 Feb 1917 aged 39 at Coolmine and was buried at Deansgrange.  Frank was a teacher and
became principal of Stillorgan Boys National School in 1901.
​
1              James O’Gorman died 16 Nov 1908 at Waldermar Terrace, Dundrum (5 months) and was
buried at Deansgrange.

Frank secondly married Bridget Doyle, daughter of James Doyle a farmer of Ballally and Elizabeth
Fitzpatrick, at Sandyford Church on 30 April 1919 and they lived at Coolmine House on the
Murphystown Road.  In November 1924 Frank received an anonymous threatening note which
read ‘You are a tyrant, your days are numbered, RIP’.  Two days later he was attacked when
cycling home to Murphystown by three men from Newtownpark who punched him and shots were
fired.  James Dowdall and ex DMP Constable was accused of being behind the attack and had paid
the  three men to attack Frank.  Dowdall’s wife Helena Angela worked with Frank as an assistant.
There were rumours of an affair but it transpired that there had been bad feeling between Frank
and Helena as she had given the teacher’s lavatory key to the pupils so that they could use it as the
children’s lavatory was not in working order.  Frank had berated Helena for this, and her husband
who was extremely annoyed, called to the school and created a scene.  The three men involved in
the attack were charged and sentenced.  James Dowdall was charged and found not guilty of any
involvement.  The school was on the Dublin Road and by 1929 was so overcrowded with over a
hundred pupils and a new school was built at Kilmacud which was opened in 1931 and where it
remains today.  Frank retired in 1941, died 23 Dec 1959 and was buried at Deansgrange.  Bridget
died 21 Oct 1973 aged 85 and was buried in Deansgrange.