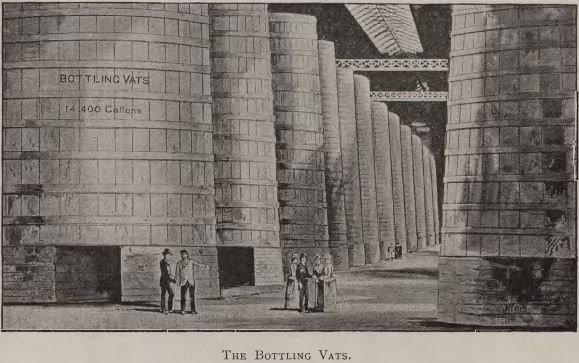 John Gardiner Nutting the second son of John Nutting and Eliza Ball of Redlands
Bristol born 24 Jul 1852 at Bidson in Cheshire.  He was living at Summer Hill, Woolton
in Liverpool when he married Mary Stansmore Bevis, daughter of Restel Ralsey Bevis
of Birkenhead on 2 Jan 1879.  He sister Elizabeth Jane was married to Edward
Frederick Burke of E & J Burke, exporters who lived at Gortmore, Dundrum. E & J
Burkes were Irish distillers, brewers and bottlers and they were the sole export bottlers
for the United States of the stout brewed by Arthur Guinness, Son & Co from 1870-1875.
They had premises at Dublin, Liverpool and New York. John was managing Director of
the Dublin operation and his brother Frederick was Managing director of the Liverpool
operation.  The partnership became a limited company in 1890 having shown an
average 90K profit in each of the previous 5 years and by 1893 they had operations at
Nepal and Melbourne.   A committed unionist, he was quite outspoken about both
unionist and nationalist Irish politicians, saying that whilst they were more productive
than their British counterparts they would be four times more productive if they spent
less time debating home rule and that what was needed was a National party of
common sense.  He was chairman of the Dublin Musical society and was on the council
of the chamber of Commerce.  They lived at Gortmore Dundrum from 1888 to 1895 and
he was church warden of Taney in 1892 and 1893, they moved to Luttrelstown House in
1895 and that same year he became Chairman of E & J Burke. He was a Justice of the
Peace, Deputy Lieutenant and High Sheriff for County Dublin in 1895/6.  John bought St
Helen’s in Booterstown in 1897 and started the process of renovating the house.

The Nutting Baronetcy, of St Helens was conferred in November 1902 on John Nutting.  In
1904 he offered to fund 10 places at Trinity for men or woman for a period of five years
and if the uptake by Catholics was sufficient it would donate a sum of 5K for the building
of a Roman Catholic Chapel within the grounds of Trinity. This offer was warmly
accepted by the Provost of Trinity.  John died in 1918 and his funeral was held at St
Thomas’s Church on Foster Avenue and he was buried at Deansgrange cemetery.  Mary
died on 7 Feb 1929 at Winchester.

3       Harold Stansmore Nutting born 14 Aug 1882 and attained the rank of Captain with
the 17th Lancers married Enid Hester Nina Homan-Mulock, daughter of Francis
Berry Homan-Mulock of Ballycumber House, Kings County on 6 Aug 1913 at St
George’s Church, Hanover Square.  He became 2nd Baronet on the death of his
father. The family lived at St Helens, Booterstown until 1922.