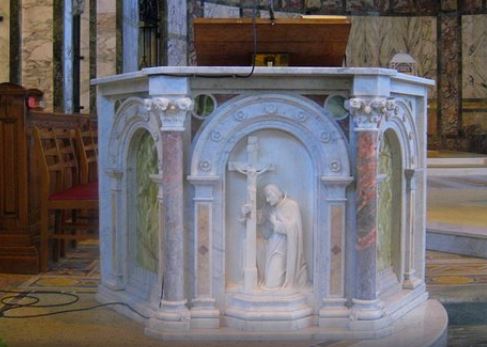 John Murphy born circa 1796 was a tea, wine and spirit merchants of 60/1 Francis Street trading as John
Murphy & Sons.  His premises went on fire in 1858 when he was in business 40 years.  He was insured and
stayed in business supplying his customers from his bonded warehouse.  His wife Mary died at Francis
Street on 10 Mar 1853 aged 47 and was interred at St Nicholas of Mira.  John became a shareholder in the
Royal Mail Steam Navigation Company in 1859.  He died 31 May 1868 at his residence, Harlech Roebuck
aged 72 and was interred in the vaults of St Nicholas of Mira.  He left 80K in personal estate.  Probate was
to Robert Hanlon of Castlemore, Carlow and to Patrick and Thomas Murphy of 60 Francis Street.

1             Patrick Peter Murphy born circa 1824 married Mary Josephine Redmond on 31 Oct 1854 at Gorey.
Patrick was living at Cambridge Terrace, Rathgar and Mary was the daughter of John Redmond of
Gorey.  Patrick was a grocer and wine Merchant of Francis Street and they lived at St Andrews,
(Temple House) Temple Road, Rathmines from 1865.  Patrick died 26 Sep 1889 aged 68 and was
buried at Glasnevin.  He left 27K in personal estate and his wife Mary was his executor.
​
1             Josephine Murphy eldest daughter born April 1857 at 1 Cambridge Terrace, Rathgar
married Michael Augustine Colgan of Johnstown House, Enfield on 30 Oct 1882 at Rathgar
Roman Catholic Church. Michael was the son of Mark Colgan of Castle Rickard, Enfield, Co
Meath.  Josephine was staying at Temple Road with her mother in 1901.

2             John Vincent Murphy born 27 July 1858 at 1 Cambridge Terrace, Rathgar.  John Vincent
Murphy, merchant of John Murphy & Sons, Francis Street took over the licence from his
brother Henry in 1893.  He absconded when the company went into liquidation in 1895.
By 1898 it appears that the premises were demolished as old bricks, slates and timbers
were being sold from the site.

3            Patrick Nicholas Murphy, born 24 Dec 1860 at 1 Cambridge Terrace was admitted solicitor
in 1886.  He lived at Temple Road, Rathmines and his office was at 19 Kildare Street.  He
married Mary A Parsons on 31 Aug 1893 at Lucan.  Mary was the daughter of George F
Parsons of Lucan Lodge.  Patrick was staying at the Russell Hotel in 1901 and 1911 when
the census was taken.  He died at 3 Clarinda Park East, Dun Laoghaire on 19 Feb 1929
and was buried at Glasnevin with his father and brother Henry.

4             Thomas Murphy born circa 1844, merchant of Francis Street and living at Harlech married Mary
Barrett (aged 24) on 31 Mar 1869 at Loughrea Church, Athenry.  Mary was the second daughter of
Joseph Barrett, Merchant/Shopkeeper of Athenry and his wife Ellen.  Thomas died on 19 Nov 1880
and left 30K in personal estate.  He was interred in the vaults of St Nicholas of Mira.  Mary arranged
for a new pulpit for Mount Argus in memory of her husband, which although the base and staircase
have been removed, appears to be the same one in place today.  It was designed by O Neill &
McCarthy and sculpted by Pearse & Sharp.  It was made of Sicilian, Midleton and Galway marble.

She employed her cousin Thomas Larkin as manager and Harlech was run as a commercial dairy.  In
1895 the firm of John Murphy & sons was in difficulty.  The partnership of Henry Osmond Murphy
and John Vincent Murphy was dissolved in 1895, a liquidator was appointed and  John V Murphy
absconded.  L & E Egan of Arran Quay purchased the stock and goodwill of John Murphy & Sons in
1896.  Mary became the guardian of her brother Joseph's children and they were living with her in
1901.  Mary died 24 Oct 1901 at Harlech and left 600 pounds in personal estate.

5            Anna Murphy, eldest daughter was professed a Carmelite nun at Tallow, Co Waterford in 1867. The
ceremony was performed by the Bishop of Ferns, a friend of her father, and the sermon was preached
by Fr Joseph of St Paul's Retreat, Mount Argus.