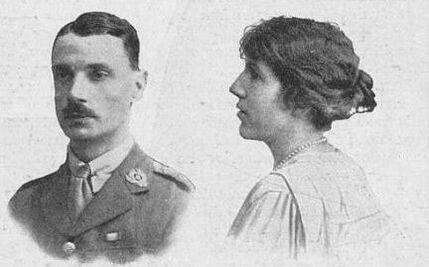 James Bruce Morgan born 24 Mar 1891 was the only son of Colonel J C Morgan AMS (died 1918 at
Bournemouth) and the grandson of Colonel Sir Alexander B Morgan, KCB.  James attended the Royal
Military College and served with the Suffolk Regiment.  He was commissioned 2nd lieutenant in 1911
and served with the Royal Air Force during WW1.  He fought at the battle of Mons and was wounded at
Le Cateau, where he was taken a prisoner of war and spent a year in a German Camp.  He married
Dorothy M A Thomas at Hastings in 1918.  Dorothy was the daughter of Edmund Thomas late of
Silverlea, Wynberg, South Africa.   James was a croquet player winning many tournaments and leagues.
The family lived at Broadlees, Folkestone from 1922 to 1958.

1                Alexander, later nicknamed "Monkey" by his school friends, only son born on 21 May 1919 at
Hampstead, London. He enlisted with the Royal Artillery Air Corps service number 85535.  He
trained initially on Magisters but within the first month of the Auster Aircrafts arrival from
Taylorcraft he had clocked up 150 hours and 500 landings.  He was awarded the Distinguished
Flying Cross on 16 Mar 1944 for services in Italy.  This medal was usually reserved for RAF
officers and he was one of the first army pilots to receive it.  He married Elizabeth Fitzgerald
Hughes on 27 Dec 1947 at St Georges, Edington, Somerset.  Elizabeth was the daughter of Adam
Nathaniel Hughes and Phyllis Elizabeth Gmelin.  Their reception was held at The Great House in
Eddington.  The bride wore blue and they honeymooned in Cornwall.  They lived at
Penmaenmawr, North Wales during the war and the couple had two children.
.
On leaving the army he became an aerial photographer and charter pilot.  His plane was an
Auster three-seater cabin monoplane.  He worked for Airviews Ltd and moved to Ireland in 1953
and started Aerophotos in Ireland.  They lived at Carysfort Lodge from 1953 to 1958,  He was
chief pilot in Republic Charter Airlines in Cork and founded Irish Air Charter Ltd in 1957 with a
Piper Apache.  He photographed farms, housing schemes, factories and provided the press with
feature photographs such as the serious flooding in August 1956.  He was a member of the Aero
Club of Ireland and in 1954 he captained the first Irish team ever to take park in an international
flying event.  He took part in the filming of the 'Spirit of St Louis, the story of Lindberg's great
west to east flight across the Atlantic which was shot in Kerry.

On 15 Jan 1958 he was engaged by the Daily Express to take photographs of the Carmody
Hotel disaster in Ennis.  An auction had been taking place in the hotel when the second floor
collapsed.  50 people fell, 8 were killed and 25 were injured.  He was taking the slides back to
Manchester but was killed when his plane plunged into the Shannon Estuary, 300 yards north of
Waller Island, shortly after take-off.  It was thought that one of the cock-pit doors might not have
been properly closed, although one onlooker noted that the landing gear and flaps were still down
when the plane crashed.  He had been due to fly across the Atlantic a few days later to pick up a
newer type Piper Apache with his friend and former colleague Max Conrad.  The aircraft was
recovered from the Shannon a few days later and Alexander was buried at St Brigid's graveyard in
Stillorgan.

A month later Manchester United were returning home from a victorious European Cup match
when the aircraft in which they were travelling crashed on take-off in Munich.  Many of the young
players lost their lives, including Dublin born Liam Whelan.  Later in the year flight KLM 607 from
Amsterdam to New York crashed into the sea 100 miles west of the Galway coast, killing all 99
people onboard.

The Morgan Collection of aerial photos is held by the National Library of Ireland.