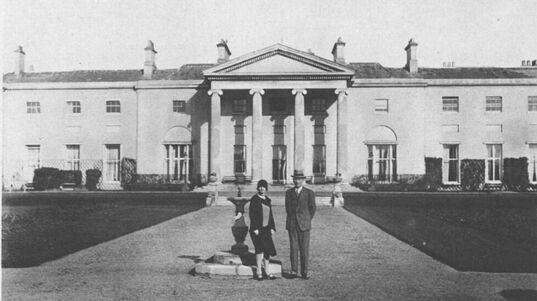 
James Ahern, born circa 1841 in Waterford, son of Patrick Ahern, a farmer.  He was a shopkeeper
when he married Ellen O’Brien, an assistant shop keeper from County Cork and daughter of
Michael O’Brien, a farmer on 17 Feb 1874 at Clougheen, Co Tipperary.  They had thirteen children of
whom five were alive in 1911.  He was a publican and shop keeper of Patrick Street, Fermoy, Co Cork.
The family moved to the Acres, in Fermoy.  James died 23 Sep 1922 and was buried at Mocollop.

7              Josephine McNeill born 31 Mar 1895 at Patrick Street, Fermoy, Co Cork attended Loretto
Convent boarding school in Fermoy winning many awards through the years.  She
graduated BA in French and German from UCD.  She became a teacher and taught at
St Louis’s Kiltimagh and the Ursuline Convent in Thurles.  She was a fluent Irish speaker
a member of Cumann na mBan, and served on the executive of the committee.  A fine
musician, she acted as official pianist to the Irish Race Congress held in Paris in 1922
after the signing of the Anglo Irish Treaty.

She married James McNeill, son of Archibald McNeill at Star of the Sea Church in
Sandymount on 20 Nov 1823.  On her wedding day she wore a raven blue silk corduroy
dress worn with a batwing jacket with Persian embroidery.  Her going away outfit was a
gabardine coat with large skunk collar and cuffs.  She was a co- director of Irish Beauty
Preparations, a company she set up with Kathleen Murphy in 1933.  She had a love of
paintings and collected porcelain and it is believed she bought some items from the
auction at Priorsland in Carrickmines after the death of Count Taafe.  She was much in
demand as a judge at charitable competitions and also gave talks to various women's groups.
She published a book of Indian children's stories that she translated into Irish, Finnsgéalta ó
India in 1932.

She was secretary of the council of the Friends of the National Collections and acted as
chair of the executive committee of the Irish Countrywomen’s Association from 1933 to
1950.  Her husband James was appointed Governor General of the Irish Free State in 1928 and
it is believed greatly resented the manner in which her husband was treated by Fianna Fáil
when they suppressed the office of the governor general in 1932.  de Valera sought McNeill's
dismissal. King George V persuaded de Valera to withdraw the request and persuaded McNeill
to bring forward his retirement to 1 Nov 1932.  They retired to Woodley Park in Stillorgan.
James died in London on 12 Dec 1938, his body was repatriated and he was buried at
Kilbarrack cemetery.

Josephine was appointed Envoy Extraordinary and Minister Plenipotentiary of Ireland to the
Netherlands in 1950.  In 1953 she visited De Valera when he was in hospital in the Hague having
had a retina replaced, perhaps she had forgiven him for her husband’s loss of job or perhaps
she was being diplomatic.   She was awarded the order of the Grand Cross of Orange-Nassau
by Queen Julianna as outgoing minister in 1955 when she was appointed minister to Sweden.
She held a joint appointment to Switzerland and Austria from 1956 to 1960 after which she
retired.  Returning to Ireland she continued giving lectures.  She died 19 Nov 1969, late of
Leeson Park, at St Vincent’s Hospital, Dublin and was buried in Kilbarrack cemetery with her
husband.

Archibald McNeill, a merchant (grocer and baker) married his cousin Rosetta McAuley at Glenarm,
County Antrim on 1 Oct 1857.  Archibald died 15 May 1889 at Glenarm.  Rosetta died at Woodtown,
Rathfarnham on 6 Jul 1917.

2            Charles McNeill born circa 1863 living at Malahide in 1901 and was a civil servant.  He was Hon
Sec of The Royal Society of Antiquaries in 1915 and a regular contributor.  He was associated
with the Irish Manuscripts Commission from its inception in 1928 and was conferred with a
D Lit in 1947.  His reports on collections of Irish interest in the Bodleian Library were highly
regarded.  Dr McNeill died a bachelor on 25 Jan 1958 in a private nursing home late of 7
Pembroke Road.

5           James McNeill, youngest son born 27 Mar 1869 was educated at Blackrock College and Emmanuel
College Cambridge.  A civil servant he was appointed to India and was based in Calcutta.  He was
Registrar of the Co-operative societies in 1904 and took up special duties in the West Indies and Fiji in
connection with India Immigration.  He was an Irish politician and diplomat and served as the first
High Commissioner to London.  He married Josephine Ahern in 1923.  He was the second Governor-
General of the Irish Free State from 1927 to 1932 and they lived at the Viceregal Lodge.  After a dispute
with de Valera, he retired a month ahead of retirement in November 1932.  He died 12 Dec 1938 at a
London Nursing Home following an operation and was buried at Kilbarrack cemetery in Howth.
Josephine died 19 Nov 1969, late of Leeson Park, at St Vincent’s Hospital, Dublin and was buried in
Kilbarrack cemetery with her husband.