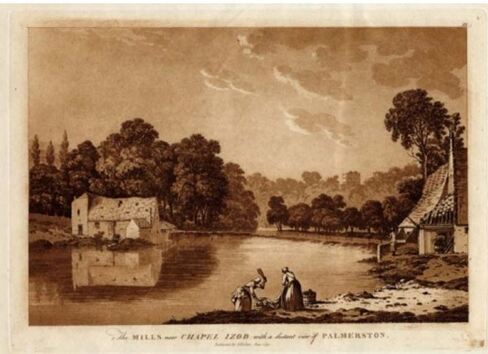 Mills near Chapelizod with a distant view of Palmerston.
Macken Family of Friarsland, Roebuck

Hugh Michael Macken born circa 1840 son of James Macken and Mary Anne Ledwidge.  His father ran
the corn mills at Palmerstown and the Redmills in Chapelizod.  Hugh grew up at Palmerston House and
the family were friends and supporters of Daniel O'Connell.  In 1860 Hugh went into partnership with
his father and traded as James Macken & Son of 32/33 Poolbeg Street.  He married Mary Josephine
Rushe daughter of Michael Rushe, a land agent and his wife Mary in 1872.  Witnesses were his siblings
Patrick Macken and Alice Macken.  After the death of his father in 1880, the mills were taken over by
his brother James and Huge went into partnership with his brother Patrick.  They traded as H M & P
Macken and were corn factors/grain brokers with premises at Burgh Quay.  Hugh was a director of The
Corn Exchange and a founder director of The Dublin Granaries Ltd.  Hugh died at his office on 03.051895
and was buried at Glasnevin. He left less than 300 in personal estate.  By 1901 the family were living at
3 North Great George Street and from 1911 they are recorded as living at 1 Ardenza Terrace, Blackrock
and by Easter 1916 they are living at 5 Waltham Terrace, Blackrock.  Mary's mother died at 35 Mount
Merrion Avenue in 1909 and Mary died 25.12.1916 at 5 Waltham Terrace.

2                  Agatha Mary Aloysia Macken born 30.08.1875 at 2 Crosthwaite Terrace, Kingstown
attended the Royal College of Music at South Kensington.  A Professor of Singing, Agatha
performed under the stage name of Miss Agatha Irelande.  She made her debut at the Royal
Albert Hall in 1898 and featured regularly as a soloist at the Antient Concert Rooms.  In 1921
she was in the United States, her tour concluding at the Metropolitan Opera House in New
York.  Agatha died unmarried on 02.12.1955 aged 80 years at St Michael’s Hospital, Dun
Laoghaire late of 45 Carysfort Avenue, Blackrock and is buried at Glasnevin.  Informant:
Margaret Keady, sister.

3                  Hubert Joseph St James Macken eldest son born 08.09.1876 at Glenville, Monkstown.  Hubert
was travelling to Australia at the time of his father’s death in 1895. Hubert travelled from
Sydney to New York circa 1922 and visited with his sister Mrs Dickinson of 15 Osborne Road,
Richmond.  He is thought to have died at Murrumburrah, Hilltops Council, New South Wales,
Australia.

10                James Joseph Macken born 31.05.1885 at Friarsland, Roebuck a Tramway Official  at Dublin
United Tramways Company.  He emigrated to Quebec and became an Engineer with the
Canadian Pacific Railway.  He married Margaret Mary J Burns from Sandymount Avenue on
18 Oct 1915 at St Jean Baptiste, Manhattan, New York.  Margaret was the daughter of Patrick
Burns and Margaret Colgan. and three of their children would go on to win the Canadian Open
Tennis Championships in the 1940's & 1950's.

12                 Joseph Francis Xavier Mark Macken born 02.04.1893 at 3 North Great Georges Street and
baptised at the Pro Cathedral.  He was educated at Belvedere College and St Joseph's,
Dumfries run by the Marist Brothers.  Francis was called to the Irish bar in 1923 and then
practised in Uganda.  He was conferred Knight Commander of St Gregory the Great and a
Papal Chamberlain to the Holy Father (Pope) in 1931.  Chevalier Macken of Kampala,
Uganda, a member of the Papal Household returned to Ireland in 1932 for the Eucharistic
Congress and again in 1950.  He is thought to have died in Uganda.