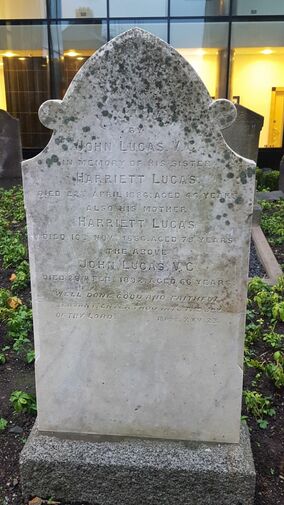 1                    John Lucas eldest son born circa 1826.  It is thought that he was born in Carlow.  He
married Ann and no issue has been found.  He joined the army and attained the rank
of colour sergeant in the 40th (2nd Somersetshire) Regiment of Foot (later part of the
South Lancashire Regiment.  He was an Irish recipient of the Victoria Cross and later
achieved the rank of sergeant-major​.  Annie died age 54 on 16 Jan 1885 at 30 Carysfort
Avenue and was buried in the Parish of St George, Dublin.
​
On the 18th of March, 1861, Colour-Sergeant Lucas acted as Sergeant of a party of the 40th
Regiment, employed as skirmishers to the right of No. 7, Redoubt, and close to the Huirangi
Bush, facing the left of the positions occupied by the natives.  At about 4 o'clock P.M., a very
heavy and well-directed fire was suddenly opened upon them from the Bush, and the high
ground on the left.  Three men being wounded simultaneously, two of them mortally, assistance
was called for in order to have them carried to the rear: a file was immediately sent, but had
scarcely arrived, when one of them fell, and Lieutenant Rees was wounded at the same time.
Colour-Sergeant Lucas, under heavy fire from Maori warriors, who were not more than thirty
yards distant, immediately ran up to the assistance of this Officer, and sent one man with him
to the rear.  He then took charge of the arms belonging to the killed and wounded men, and
maintained his position until the arrival of supports under Lieutenants Gibson and Whelan.
- The London Gazette, 19 July 1861.

The action was part of the First Taranaki War during the New Zealand Land Wars. This campaign
started over a disputed land sale at Waitara.  In December 1860 British forces under Major
General Thomas Simson Pratt carried out sapping operations against a major Māori defensive line
called Te Arei ("The barrier") on the west side of the Waitara River and inland from Waitara, which
was barring the way to the historic hill pā of Pukewairangi.  The 18 March was the last day before a
truce was declared.  He was invested with the VC by General Officer Comanding New Zealand, Lt
Gen Duncan Alexander Cameron at Ellerslie Racecourse near Auckland on 1st Oct 1862.  He was
also awarded the New Zealand medal 1860-61 and the army Long service & Good conduct medal.
- Ken Scanlon, 2016.

John applied for discharge and was given it December 1868 having served 21 years.  He was
presented with a gold watch by the sergeants of the 40th regiment stationed at Carlisle and
received a tea and coffee service from the officers.  John Lucas a Sergeant-Major died
29 Feb 1892 aged 66 years at his residence Park Lodge, Parkgate Street, Dublin where he
lived as a park keeper.  He was interred with semi military honours at St James
Churchyard where is mother and sister lay.  The dismounted band of the 3rd Hussars
preceded the hearse and it was followed by the family and the park-keepers.

He was featured in Beeton's Boy's Own in 1865 and in the Victor Comic no 730 'The Warrior
Strain' 15th Feb 1975.  During restoration work at St James's church in 2016, now part of the
Pearse Lyons Distillery, the broken headstone from his grave was found.  It has been
repaired and renovated and re-erected close to it's original position.

4                   Hopton Lucas born c1839 in County Dublin was living at Blackrock when he married Abigail
Moody at Monkstown Church on 8 Sep 1867.  He is also listed as being in the RIC the
same year.  At his children’s births, Hopton describes his occupation variously as coachman,
gardener and servant.   Abigail was the daughter of William Moody, a farmer and was born
in County Wicklow circa 1836 and was living as Fitzwilliam Street when she married.  She died
12 Mar 1911 at 9 Patrick Street, Kingstown.  Hopton died at 10 Feb 1915 at 39 Glasthule
dwellings, the home of Thomas & Christina Lucas*.  Hopton & Abigail were buried at St Brigid’s
Stillorgan.

4             Helena Lucas born Jan 1875 at Brooklawn, Blackrock was baptised at Christchurch,
Carysfort.  She married John Wesley Trimble (born 7 Aug 1870 at Rahins, Mayo) at the
Methodist Church of Ballina on 19 Jan 1902.  She died in a tragic road accident on
7 Oct 1936 at Rahins, Ballina, Co Mayo along with her daughter Edith.  Their daughter
Olive survived the accident.   John died at the home of his daughter Olive at Rosemary
Street, Roscrea on 17 May 1944.

6          Henry Lucas, third son born 3 Dec 1880 at Beechwood, Borrisokane, Co Tipperary was
baptised at St Brigid’s Church, Stillorgan on 12 Sep 1881 while the family were living at
Anglesea Avenue, Blackrock.  He was a constable in the RIC based in East Belfast 1901.
He was a gunner with the 39th Siege Battery of the Royal Garrison Artillery.  He married
Ellen Fitzpatrick born circa 1883 from Cavan.  Henry was wounded during the battle of
Lys and taken to the casualty clearing station.  He died on 9 May 1918 and was buried at
Esquelbecq Military cemetery near Nord, France.  He is remembered on the memorial at
Holy Trinity Church, Rathmines.  Ellen died 15 Feb 1949 at 10 Mount Pleasant Buildings,
Ranelagh.

7             Marjorie Lucas born 6 Oct 1917 at Mount Pleasant Buildings, Dublin while her
father was in France with the expeditionary army force.  Marjorie of 5 Larkfield
Gardens, Kimmage married Patrick J Scanlon of 10 O'Connell Gardens on
27 Dec 1938 at Sandymount and some of their family still live locally.