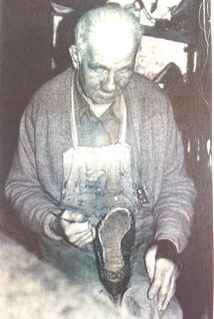 The Licken Family of Stillorgan

There has been a Licken family in the area for hundreds of years.  The first mention we
have found of them is the on the Hearth Money Rolls 1664.

2           Patrick J Licken born 3 Mar 1903 at Brewery Cottages married Elizabeth Ellen
(Lily) Gilchrist, daughter of James Gilchrist on 29 Nov 1923 at the Registrar office
at Mitchelstown.  Patrick was a private in the Army Air Service and based in
Fermoy Aerodrome.  A boot and shoemaker, he was a traditional artist in leather.

'He came to live in Stillorgan in 1917 to a house by a stream (since culverted).
Across the road from his shop Was Tigh Lorcain Hall, the home of the Mr Morrow,
dairyman and farmer.
His neighbours were Byrne's Dairy and Cullen Pub in the dip of the road.  Glynns
were in the Post Office and up a bit of the way Sargison's had a general grocery.
There was a horse trough up by The Grove and a pump nearby, which was moved
from one side of the road to t'other'.

The photo of Mr Licken is from an old Stillorgan directory (photographer unknown).
Patrick died 15 Jun 1986 at 34 Beaufield Park and was buried at Deansgrange.
Elizabeth died a few years later at 30 St Laurence's Park and was buried with her
husband.
​
1            Christina Jane Licken of Beaufield married Matthew Joseph Manning, soldier
and son of Matthew Manning, a gardener on 2 Apr 1945 at Kilmacud Church.
Matthew was based at Custume Barracks Athlone.

3         Robert Licken born circa 1852 at Ballycoras, baptised Sandyford in 1852.  A lead pipe
maker he married Johanna Shirley of Reginald Street and daughter of Thomas Shirley,
a labourer at St Catherine’s RC Dublin on 15 Oct 1882 from county Wexford born circa
1871.  Robert and Johanna were living at Great Brunswick Street without their children
in 1901 and their children were boarding in Wicklow.  Robert died at the workhouse
(North City Infirmary) on 24 Feb 1906.