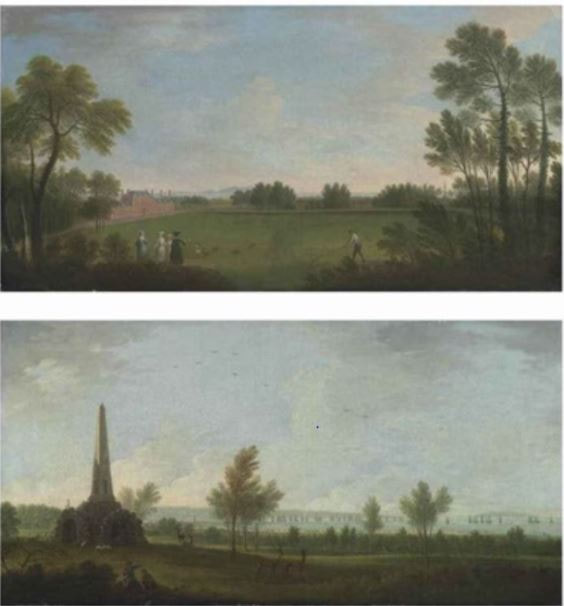 In the 17th and 18th centuries French Calvinist Protestants were persecuted and alienated
by a Catholic monarchy, causing as many as 500,000 of them to flee their own country.  Small
waves of French Protestant immigrants had arrived in Ireland as early as the reign of Elizabeth I.
In 1662, following the restoration of Charles II, the Irish Parliament passed a law to encourage
the immigration of French Protestants to Ireland.  About one-fifth of the Huguenot population
ended up in England, with a smaller portion moving to Ireland.  The Huguenots in Ireland
maintained their traditions and language but by the early 1800s they had become integrated
in Ireland.

Nicholas Le Favre was a lottery ticket seller at 4 Crampton Court off Dame Street in 1780 and
had offices in Essex Street and Grafton Street by 1783.  His offices at Essex Street and 101
Grafton Street each had a statue of a lion outside the door and became known as the Lions
Offices.  Between 1783 and 1785 he didn't trade as a lottery agent but returned to the family
business selling haberdashery, perfume and millinery from his premises at 101 Grafton Street.
He also comissioned three houses at Merrion Square (41-43) in 1786 and had also purchaes
in the lots scheme south of the Liffey.  In 1786 he went back into the Lottery business and in
1788 he was fined for irregularities in trading.  In the same year he was in a legal battle with
theatre Mananger Richard Daly of Smock Alley.  In 1791 Nicholas leased Stillorgan Park from
Rt Hon Joshua Allen and in 1793 Nicholas appeared on the Qualification rolls taking an Oath of
Alligance to the Crown and by 1794 Nicholas was looking for a buyer for Stillorgan Park.  He
retired from business in 1800.  He appears to have brought up his family as Roman Catholic.

Ann and her daughter Margaret were both left a bequest in Benjamin Disraeli's Will of 1814.
(At this time no connection has been found to Lord Beaconsfield).   Ann received 500 pounds
and Margaret their daughter received 1000 pounds.  Benjamin of Fitzwilliam Street was a
​fellow Huguenot, Public Notary, Stock Broker and lottery ticket seller.