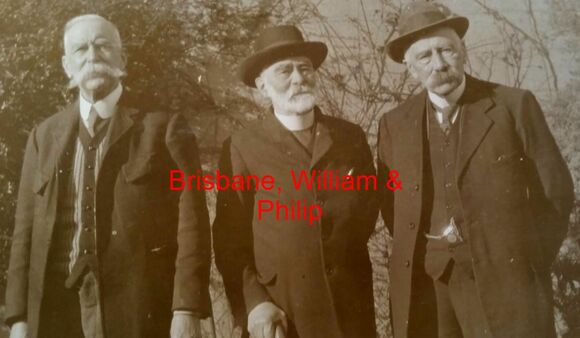 
Richard Large was the eldest son of William Large, 35 South Terrace, Cork.   He was a solicitor in a
co- partnership with Richard Nevill Parker and Richard Large in Cork City.   He owned 8 Adelaide
place, Cork.

1                     William Somerville Large born Cork City 3 Dec 1846.  He attended Trinity and took Holy
orders.  He was instituted priest in 1871 and was curate of Castlemacadam from 1870
to 1875, before taking on the role of curate of St John's Sandymount.  He was
appointed incumbant of Carnalway in County Kildare in 1887.  He changed his name by
deed poll to William Somerville Somerville- Large which was registered in the High Court
in September 1887.  He married firstly Alice Emily Maunsell, daughter of the Rev Richard
Dixie Maunsell of Celbridge on 8 Sept 1887 at St John’s Church, Sandymount.  Alice died
on 30 Sep 1888 age 24, shortly after the birth of their daughter Alice.  Her funeral took
place at St John’s Sandymount and her burial was in Celbridge Churchyard.

William then married Elizabeth Townsend Townsend, the widow of Horatio Hamilton
Townsend and the daughter of Becher Lionel Fleming on 25 Apr 1899 at St Andrew's
Church, Malahide.   They had met on a trip to the Holy Land and Jerusalem.  He became
4th Canon Kildare and Rural Dean of Clonbulloge in 1902.  Shortly after his arrival at
Carnalway he endeavoured to enlarge and refurbish the church with a donation from
Mrs Wakefield of Carnalway Lodge.  He applied and was granted permission under faculty
from the Archbishop to go ahead with the work, and if old bones were uncovered
they were to be reinterred elsewhere in the graveyard.  During the laying of the new
foundations it came to light that there were a number of recent Roman Catholic burials in
the area of the extension for which no record of burial was held by the church, including a
Mr Kane who had been buried in 1881.  This incensed local people and Mrs Wakefeld
wrote to the Vestry that she wouldn't have donated the money for the enlargement of the
church had she had know this.  Rev Somerville-Large spoke to the Vestry and also wrote to
the local Board of Guardians, explaining that he had been unaware that anyone had
been buried in this area of the Churchyard in fifty years.  He expressed his sympathy to
the Kane family for the hurt caused and that this enlargement work would not now go
ahead and that they were willing to erect a headstone for Mr Kane if the family so
wished.  This should have brought the matter to a close but some local families who
were unhappy with the installation of Rev Somerville-Large from the start found it
difficult to let go of their grudge.

Elizabeth had a brain haemorage in 1917 and William asked permission to retire.  They
moved to Farmhill, Dundrum and Elizabeth died there six years later on 1 Aug 1923.
William died 13 Sep 1939 at Farmhill, Dundrum leaving an estate valued at just under
ten thousand.  He was the last surviving clergyman ordained  before the
disestablishment of the Church of Ireland.  His funeral took place in Carnalway,
County Kildare.

2                 Philip (Paddy) Townsend Somerville-Large born 8 Jul 1900 at Carnalway
rectory, Kilcullen, co Kildare.  He was District Engineer in the Great Southern
Railways Company.  He married Grace Anne Orpen the daughter of Charles
St George Orpen on 26 Jan 1933 at Tullow Church.  He was a founder member
of the Mount Street Club.  Paddy and Grace had one son.

3                Lionel Becher Somerville-Large born 28 Jul 1901 at Carnalway in County
Kildare.  Living at Farmhill, Dundrum, and an Ophthalmic surgeon married
Beatrice Sherlock, the daughter of the late Charles Gregg Sherlock of Killiney
on 5 Sep 1934.  Becher and Beatrice had one daughter.

4                William Collis  (Collis) Somerville-Large born circa 16 Sep 1902 in County Kildare.
Living at Farmhill, Dundrum he married Katherine Clara Joyce (Joyce) Phillips at
Killiney Church on 29 Jul 1926.  Collis  joined the Royal Army Medical Corps in
1940 as a Major.  He was an orthopaedic surgeon and surgical registrar of the
Adelaide Hospital and a keen yachtsman and his schooner 'The Gannet' was
built in Ringsend.  Collis died at Monkstown hospital on 1 May 1951, a plaque
was placed in the Adelaide Hospital in his memory.  Joyce and Collis had two
sons and a daughter.

2                       Philip Townsend Somerville Large born Cork City 1848 was educated at Queens
University, he joined the India Public Works Department as an engineer in 1870.  He
changed his name by deed poll  which was registered in the High Court in September
1887 to Philip Townsend Somerville Somerville-Large.  He married Edith Maud Kinloch,
the daughter of Alexander John Kinloch on at the British India Office at Bombay on
29 Oct 1885.  He retired in 1897 having been responsible for the building of 400 miles
of the Bengal Nagpur Railway.  He died 2 Jun 1929 at Farmhill, Dundrum.

3                      Brisbane Warren Large known as Briz was born circa 1850.  He was a Lieut. Col in the
Royal medical corps.  He changed his name by deed poll which was registered in the
High Court in September 1887 to Brisbane Warren Somerville-Large.  He married
Alice Rose Grace Jameson on 8 Aug 1889.  Alice was  born in India she was the daughter
of the late Major General E W Sargent and the widow of John William Jameson.  They
had no children.  He served in the South African war from 1899 to 1902 as principal
Medical Officer of hospital No 6 and 12.  He was awarded the Queens Medal (3 clasps)
and the Kings medal (2 clasps) and died 4 Feb 1934 at Pembroke Road, Dublin.  Alice of
Ardmore, Booterstown died at Portobello Hospital on 2 Jul 1913 age 59.