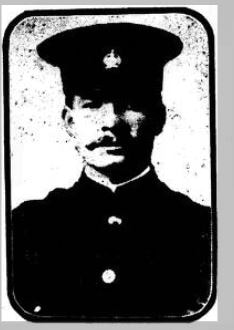 Patrick Kenny son of Charles Kenny, a labourer born circa 1853 in Donnybrook.  He was a gardener
working at Shamrock Hill in Donnybrook at the time of his marriage.  He married Margaret Rossiter
on 12 Nov 1876 at Haddington Road Church.  Margaret was a servant working at 21 Raglan Road
for the Sullivan family, pawn brokers of Ballybrack and the daughter of Michael Rossiter, a farmer
from Wexford.  Patrick worked In Clontarf in 1893 and was at Windy Arbour by 1901.  He was
working at Herbert Hill for the Wallis family by 1911 and was living at the gatelodge with 3 sons
and Margaret was living next door with her two daughters.  The couple had 10 children all of whom
survived in 1911.  In 1914, when they were living at Herbert Hill, they received a letter from the King
sending them his best wishes as 4 of their sons were serving.  By 1917 they were living in Notting Hill
and Patrick was working in Hyde Park as a gardener.  Their son Gregory was living with them in 1921.
​It is thought that Margaret died in 1927 and Patrick in 1934.

4          Charles Joseph Kenny born 21 Jan 1883 at the Rotunda baptised at the Pro Cathedral.
The family were living at 27 Moore Lane when he was born.  He enlisted and served
during WW1 in a War Signal Station.

5          Thomas Kenny born 23 Nov 1886 baptised at the Pro Cathedral working as a van boy in
1901.  He enlisted with the Irish Guards and served during WW1.  On 1 Nov 1915 Thomas
was wounded and missing in France and was later declared killed in action.  His parents
put a notice in the newspaper the following year for his anniversary and asked American
newspapers to copy.

8           Richard Gregory (Gregory) Kenny born 11 Oct 1893 at the Rotunda Hospital baptised at
the Pro Cathedral.  The family were in Donnycarney/Clontarf at the time of his birth.  He
was working as a servant in 1911.  He enlisted in 1912 with the Royal Garrison Artillery
and served during WW1.  Gregory No36980 served with the Royal Garrison Artillery in
Gibraltar and France and was awarded the 1914 star.  He was wounded and transferred
by train to Rouen on13.03.1915, and from there to Sir Patrick Dun’s Hospital. In 1939 he
was living with his wife Daisy and two children at 20 Bodmin Grove, Merton, Surrey and
was working as a coach builder.

9          William Francis Kenny born 15 Nov 1896 baptised at the Rotunda Hospital.  He was working as
a servant in 1911 and later as a motor apprentice.  He enlisted in 1914 and served during WW1
with the Royal Munster Fusiliers and the Royal Irish Regiment.  Private Wiliam No 3920 was
wounded in 1915 and transferred to the Redcross Hospital, Giza, Cairo, Egypt suffering from
debility on 24.11.1915. in Egypt.  His mother wrote to the war office looking for further details
on him in 1917, he later applied for a disability pension.