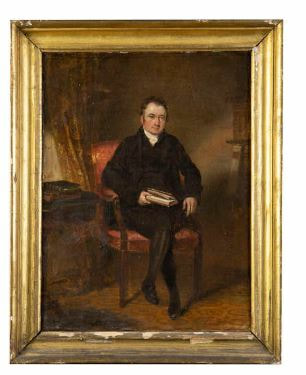 Thomas Kelly was an Irish barrister, judge and politician.  He was born at Fidane, in County Galway,
third son of Edmond Kelly, or O'Kelly.  He entered the Middle Temple in 1747 and was called to the
Bar in 1753.  He spent some years in the West Indies.  On returning to Ireland he went on the
Connacht circuit, where he sat as a judge of assizes.  He married Frances Hickie, daughter of James
Jephson Hickie of Carrick-on-Suir.  They had three daughters, Annabella, Harriet and Charlotte, and
one son Thomas.

He was a kindly judge but according to Barrington - he was an embarrassment,.  "Kelly has been most
unfortunate in his judgments: scarcely one upon a dubious point which has not been set aside."  His country
seat was Kellyville near Ballintubbert, County Laois, which he purchased circa 1777.  He retired in
1801 and died in 1809 at his town house in Dublin.

Thomas Kelly, only son, born 13 Jul 1769, followed in the footsteps of his father, he attended Trinity,
entered the Middle Temple but abandoned law and became a clergyman of the Church of Ireland
circa 1792.   His evangelical preaching led to him being forbidden to preach in the established church.
His great desire, was, “Do all to the glory of God.”  He married Elizabeth Tighe, of Rosanna, a lady of
considerable wealth which added to his own considerable fortune.  Elizabeth was the daughter of
William and the heiress Sarah Fownes, and the sister of William 'Statistical' Tighe of Woodstock.

Thomas built several Chapels in which to preach.  (Wexford, Portarlington, Carysfort and Athy).
Congregations in the Chapels in Dublin and Athy, considered Kelly their Pastor.  He was a popular
preacher and crowds flocked to hear him wherever he went.  A humble man, he used his personal
wealth to help the starving of Dublin during the famine.  He established the Kellyites but is best
remembered for the hymns he wrote (over 700), both the music and lyrics, which are still sung
today.  The family lived at Rathmines Castle from 1830 to 1833.  Thomas died 14 May 1855 at
12 Pembroke Place, Dublin aged 86 years and was buried in the Kelly family vault in the grounds of
Ballintubbert Church.  His obituary says of his preaching that it was 'excellent and of constant variety,
exhibiting mature thought, sound judgment and eminent faithfulness.'  Elizabeth died at 12
Pembroke Place, Dublin on 22 Jun 1857 aged 83.  A large mausoleum dedicated to the Kelly family
lies northeast of the church.  A  granite memorial remembers the Kelly family members interred
as well as Capt Richard Wingfield.  Some of Kelly's published hymns are also inscribed on the
memorial.

3           Richard Thomas Wingfield attained the rank of Captain, 52nd Light Infantry, 36th Regt
of Foot.   He married Isabella Jane Guille, daughter of the Rev Edward Guille of Jersey.
He was involved in The Indian Rebellion of 1857–58,  he died in 1870 aged 34 and was
buried in the Kelly Vault at Ballintubbert churchyard.