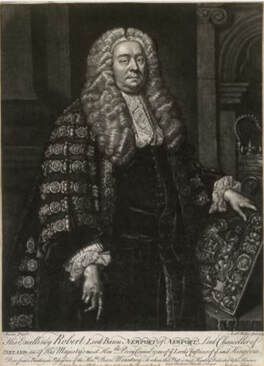 Robert Jocelyn, born circa 1688 only son of Thomas Jocelyn and Anne Bray.  He was grandson of Sir
Robert Jocelyn, bart, of Hyde Hall, Hertfordshire.  He was called to the Irish Bar on 27 Jan 1719 and
moved to Ireland in the 1720’s.  In a by-election of September 1725 he was returned to the Irish
House of Commons for Granard, County Longford.  He was appointed Third Serjeant on 28 Mar 1726,
and at the general election of 1727 he was elected for Newtown, County Down.

Robert married Charlotte Anderson, daughter and co-heiress of Charles Anderson of Worcester in
1720.  On 4 May 1727 he became Solicitor General and on 22 Oct 1730 was promoted to the post of
Attorney General.  He was appointed Lord Chancellor 7 Sep 1739.  A 200-page 'household dining'
volume survives and is held by the Winterthur Museum in Delaware containing ‘menus for
approximately eighty dinners and eight ball suppers hosted by Jocelyn during his years as Lord
Chancellor of Ireland.  All of the menus are diagrammed, showing the placement of the serving dishes on
the table.  When guests were present, their names are generally noted adjacent to the diagrams. Most of
the dinners are served in two courses.  The simpler dinners comprise as few as three or four dishes in
each course.  Most, though, include six to ten dishes in each course, and the fanciest dinners, such as
those honouring members of the peerage, have many more and also feature spectacular dessert pyramids
as centerpieces in the second course.  The ball suppers are diagrammed on L-shaped tables, from which
guests helped themselves.'

It is thought that it was during his tenure of Mount Merrion Robert that a well for fresh water was sunk at .
Charlotte established a school at Mountown to educate, feed and clothe 20 girls.  She died 23 Feb 1747 and
her Will was lodged with her residence given as Ballywilliam, Donaghadee, Co Down.  Robert was created
Baron Newport, of Newport, in the County Tipperary by letters patent dated 29 November 1743 and Viscount
Jocelyn in November 1755.  He was a member Physico-Historical Society (1744-52) which sought to collect
and publish Irish county surveys.

1                Robert Jocelyn, only son born circa 1722 returned from his grand tour to Dublin in 1749.   His
birthday was celebrated in November with dinner and a ball.  He was MP for Old Leighin and
Auditor General in 1750.  He succeeded his father as second viscount in 1756.  He was created
Earl of Roden of High Roding in the county of Tipperary on 1 Dec 1771.  The Jocelyn family held
land in county Tipperary in the mid 18th century. The Earl's Irish estates were valued at £5,000 in
the mid 1770s.  In 1752 Robert married Anne Hamilton, daughter of the 1st Earl of Clanbrassill.
When her brother died in 1798 his estates in counties Louth and Down passed to his sister Anne
and her heirs.

He secondly married Frances Claxton, widow of Richard Parsons, 1st Earl of Rosse and daughter of Thomas
Claxton of Dublin at St Peter’s Church on 16 Nov 1754.  His town house was St Stephen's Green West, and
he leased Mount Merrion from Viscount Fitzwilliam.  He resigned in November 1756 due to ill health and
went to Bath to take the waters, he stayed with Lord Southwell in Brewer’s Street before moving to Dover
Street where he died on 3 Dec 1756.  Frances died 25 May 1772.