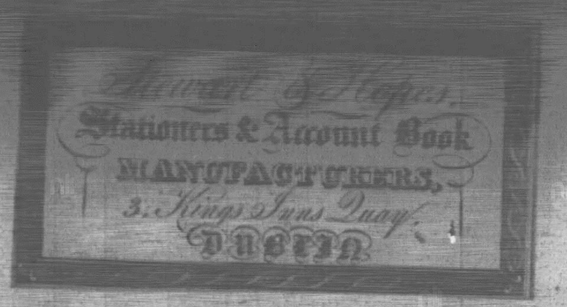 
Charles Hopes born circa 1770 married Catherine Stewart in October 1804.  He was a partner in Stewart &
Hopes, booksellers and stationers of 1 Church street, corner of Inn’s Quay.  He was a licenced stamp
retailer living at Inns Quays in 1813 and was ordained an Elder of the first Presbyterian Church on York
Street, Kingstown which opened in 1828.  He was living in Booterstown by 1833.  He owned land at
Mullnahinch, Monaghan which he leased out and was High Sheriff of Monaghan in 1853.  He was on the
board of the Commercial Building Company and was a director of the Royal Canal Company and the
Hibernian Fire & Life Insurance Company.  He laid the foundation stone of the new Presbyterian Church
in York Street, Kingstown in 1861.  Charles formerly of South Hill died on 24 Jun 1864 at Rockville on Mount
Merrion Avenue and was buried at St Michan’s.  He left 35K in personal estate of which 9k was bequeathed
to various charities and missions in his Will.  His nephew Charles Hope of King Street, Manchester was one
of his executors.

Another nephew was John Charles McAdam who lived at Muliahinch House.  John died in London on his way
back from the Paris Exhibition with his wife Susan on 15 Oct 1867 aged 73.