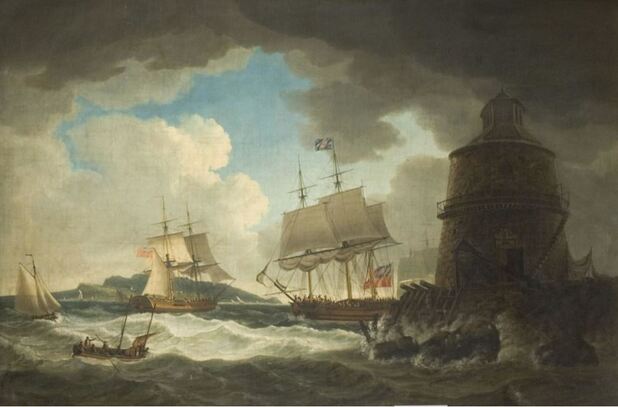 1          James Hewitt eldest son born circa 1751 attended Trinity and took holy orders. He married
Henrietta Judith Pomeroy, daughter of Arthur Pomeroy, MP for Kildare and Mary Colley, on
25 Jul 1776 at Newbury in Kildare.  He was Serjeant at Law and MP for Belfast.  Henrietta died in
1778 and James secondly married Alicia Oliver on 23 Dec 1781.  He succeeded his father as 2nd
Viscount in 1787.  He was Dean of Armagh between 1796 and his death on 15 Apr 1830 at
Ranfurley House, Rostrevor in his 80th year.  His body was repatriated to England and he was
interred at Trinity Church, Coventry.

1          James Hewitt eldest son born circa 1783 married the Hon Mary Anne Maude, sister of
Viscount Hawarden at Clifton in April 1809.  He was a commissioner of excise and
succeeded his father as 3rd Viscount in 1830.  James returned to Ireland in 1836 to live on
his estate in Donegal.  James died 1855.

James secondly married Ambrosia Bayley, daughter of Rev Charles Bayley of Navestock in 1766.  He was
a judge on the Kings bench when is was appointed Lord Chancellor of Ireland by letters patent on
24 Nov 1767 and his male heirs to the dignity of Baron of Ireland, by the title of Baron Lifford, of
Lifford, in the County of Donegal.  His salary to include contingencies was 10K.  He resided in Henrietta
Street, Belvedere House and Santry house before taking Stillorgan Park House as his county residence
in 1780.  Here they hosted many dinners where the Lord Lieutenant was a regular visitor.

He and his family returned to England in 1780 and rumours abounded that he was to be replaced but
he returned later that year aboard the Lord Lieut’s ship, the Dorset Yacht.  He was raised to Viscount
Lifford of Donegal in 1780.  He retired in 1788 on a pension of 4K per annum for life with official provision
for his wife and sons.  He was responsible for drawing up The Regency Bill of 1789 which was a proposed
Act of Parliament to provide for King George III's eldest son George, Prince of Wales, could act as regent
due to the King's incapacity through mental illness.  The legislation wasn't enacted until 1811 as the King
recovered.  James died at Sackville Street 28 Apr 1789 aged 76.  It was thought he would be buried in
England but by special directions given in his Will he was buried at Christ Church Cathedral.  The hearse
was pulled by 6 black horses and the service was conducted by Dr Richard Allott. The Rt Hon Lady
Viscountess Lifford (Ambrosia) died in April 1807 in her 75 year at Chichester and was interred at
Coventry.

7             Elizabeth Hewitt died unmarried.
​
2          William Hewitt was born in Coventry in 1719.  In 1767 Hewitt was appointed a Commissioner 'for the sale
and disposal of lands in the Ceded Islands on the West Indies'.  The work of the Commission was
terminated in 1771 and William returned to England.  In 1776 he was appointed Commissioner 'for
adjusting the differences that have arisen or may arise in respect to sales and leases of lands in the islands
of Grenada, the Grenadines, St. Vincent, Dominica and Tobago.'   He lost his estates on Dominica when the
island fell to the French in 1778, and was involved in several bankruptcies and left considerable debts.  He
died in St Eustatius on 16 May 1781.