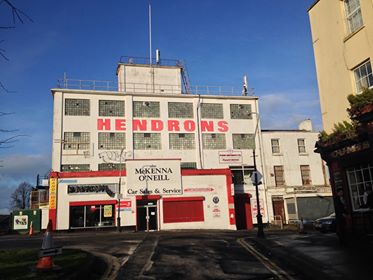 Felix Hendron, a carrier married Margaret McCusker on 13.01.1896 in Lurgan.  Felix died in 1909
and Margaret died in 1910 and their nine living children were taken in by Felix's sister Margaret.

Hendron Brothers Carriers was established in the 1920's by Francis Patrick Hendron and his
four brothers, Felix, Henry, Thomas and Vincent.  By 1929 they were trading from Tomb Street and
were involved in supplying machinery.  The business in Belfast expanded and by 1935 they had
premises in Dublin.  They purchased a site in Dominick Street Broadstone in 1935 which would take
a number of years to build on and in 1936 they bought premises at Little Denmark Street.  They
supplied plant machinery eg wood working machines, air compressors and grinding mills.  They
were the sole agent for Skoda who provided the turbines for the new alcohol factories being built
​throughout Ireland.

The Broadstone building was engineered and designed by Vaclav Otto Gunzl, a engineer from
Czechoslovakia.  Prior to his employment with Hendrons, Vaclav was one of the commissioning
engineers at the Industrial Alcohol plant at Riverstown, Cooley which opened in 1937.  By 1939
he was employed by Hendrons as machinery workshop manager.  The Hendrons had bought
the site at Broadstone in 1935 and building work commenced in 1946.  The building was pure
utilitarian -  reinforced concrete and steel with glass blocks used for windows, but it fitted the
brief which was a building to combine workshops, offices and retail into one space.  The building
was built by Hendrons' own employees, one floor at a time and wasn't finished until 1959.

1               Francis Patrick Hendron born 02.01.1897 at Edward Street, Lurgan married Kathleen
Patricia Matthews daughter of Colonel John Doran Matthews of Ballincollig, Cork on
22.02.1946 at St John the Baptist Church in Blackrock.  Francis had been living at Park
House, Stillorgan since at least 1942 and contiued to live there after his marriage until
1961.

5               Lily Hendron born 19.08.1901 at North Street, Lurgan died of burns accidently
received while she was minding two of her siblings who had measles.  Her brother
Felix tried to put the flames out.

Photograph of Hendrons courtesy of Aaran Henderson of Dublin Decoded.