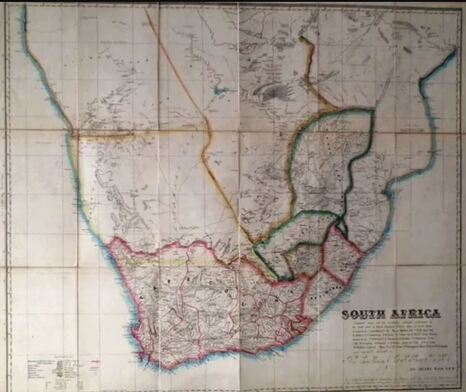 1             Henry Hall born circa 1814 in Dublin son of Robert Hall and Mary Ann Craythorne.  He
was to attend Trinity but this did not happen as his father died in 1828.  He worked for
a building firm and sat the civic service examinations.  He was in the employ of the
British Government Service as a foreman of works in the Royal Engineer Department
and was ordered to the Cape Colony in 1842.  Henry worked in the Eastern Frontier
during the Frontier Wars of 1846 and 1851 to 52 and was a clerk of the works based in
Cape Town.  In 1849 he commenced a map of the Cape Colony and Natal at the request
of the General of Fortifications.  He had the help of Robert Moffatt, surveyor (son of a
missionary and brother in law to David Livingstone) and he used numerous sources to
compile the map.  These were very varied and even included information from the
Wesleyan, French and German Missions.  He acknowledged on the map the particular
contribution of information on the area N of 20° was obtained from Dr Livingstone,
Green and Chapman.  The map was slow in being published as additional information
kept appearing and had to be redrawn on a least four occasions but he did managed
to achieve a remarkable degree of accuracy and completeness.  His map of the Eastern
Frontier of the Colony of the Cape Good Hope was published under the sanction of the
government in 1856 by Edward Stanford, Charing Cross, London and in 1857 they
published his map of the entire African region south of 16°S.  In 1852 he visited England
briefly for health reasons, but returned to the Cape Colony by 1853 where he remained
until 1860.  In 1859 he compiled a manual to the Geography of South Africa as a
companion to the map published by Saul Solomon in Cape town and a second edition
was published in 1866.  He was awarded a FRGS (Fellow Royal Geographical Society) by
1859.  He was ordered to England in 1860 and left on board the Celt.  On leaving he
received  £100 in recognition of services rendered.  He was attached to the Portsmouth
​               Royal Engineer Office as Purveyor until at least 1870 and was retired by 1872.  Henry was
in Ireland in 1874 and attended the funeral of his brother in law  James Price.  He died
25 Feb 1882 at 4 Glynde Terrace, Lavender Hill, London, formerly of Byron Villa, Park
​               Road, London.

1          Henry Alexander Thomas Craythorne Hall born 3 Apr 1876 at 3 Campfield
Terrace was work as a land agent in 1901.  He emigrated to Boston, Suffolk,
Massachusetts, United States in 1906 and was in San Francisco by 1910.
Henry was a cashier and bookkeeper for the Pacific Improvement Real
Estate Company and was living with his wife Mary (Minnie) at 1350A
Sacramento Street, San Francisco, California, United States in 1917.

2          Emma Margaret Agnes (Agnes)Hall born 25 Feb 1878 at 5 Ulster Terrace,
Stillorgan baptised at Stillorgan Parish Church. Agnes was a nursery
governess living with her mother in 1911.  She died a spinster on
12 May 1965 and was buried at Deansgrange.

5         Thomas Craythornw Hall born 27 Mar 1882 at Ardenza, Foxrock.  He
emigrated to Boston, Suffolk, Massachusetts, United States in 1906.  He was
working as an electrical engineer in a dry goods store in San Francisco in 1910.
He worked in Honolulu for a number of years before returning to California.

7         Constance Dorothy (Dolly) Hall youngest daughter born 1 Feb 1886 at
Ardenza, Foxrock married Edgar Joseph Davidson on 28 Sep 1909 at St Mary’s,
Donnybrook.  Edgar was an electrical engineer and the son of John Davidson of
Craigie, Sutton.  He worked for the ESB and was involved with amateur
dramatics.  He died 24 Apr 1945 at 33 Herbert Avenue.

4           Geoffrey Craythorne Hall born 1848 at Grahamstown, South Africa received a medical
education at Nexley Hospital, England.  He joined the Indian Army as a medical officer
in 1873.  He married Louisa Amelia Pollock in India on 21 Oct 1875.  He was appointed
medical officer of Naini Central Jail, Allahabad in 1876 and subsequently appointed
inspector general of prisons in the Province of Agra & Oudh.  Louisa was the daughter
of Archibald Reid Swiney Pollock.  Louisa died at Mynpoorie, Bengal 29 Sep 1876.  In
1896 he was principal medical officer for the Punjab and retired in 1903.

Geoffrey secondly married widow, Fanny Louisa Corbett on 29 Mar 1881 at Bombay.
Fanny died at Bexhill 26 Nov 1907.  Geoffrey had a Pekinese dog and was Hon Sec of
the local RSPCA.  He was a member of Bexhill Golf Club and died at Ulidia, Bexhill,
Sussex on 27 Oct 1923.