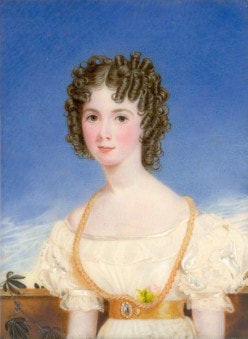 Henry Deane Grady of Stillorgan Castle was the son of Standish O’Grady and Elizabeth Deane and was
called to the bar in 1787.  He married Dorcas, the daughter of William Spread, lawyer, of Ballycannon,
Co Cork and Elizabeth Peard.  He was a successful barrister and entered the Irish parliament for his
native Limerick in 1797.

A small man, he was known for his wit, humour and eloquence, it was said that his wink said as much
as many a rival's speech.  He was also quite the duellist having taken part in at least four.  He succeeded
to Lodge in Co Limerick on the death of his father in 1809.  They were living at York Street in 1799 when
one of their children was born but by 1809 they were living in Stillorgan.
​
He was Counsel to Excise and Customs for over 20 years and when he retired he received a pension of two
thousand a year.   His obit mentions him as the father-in-law of Lord Muskerry, Lord Massareene, Lord E
Chichester, Sir David Roche & the late Mr Blennerhassett and during his tenure of Stillorgan castle, it seems
that the house became known as the House of Lords due to the illustrious marriages of his daughters.

1          Standish Deane Grady, eldest son.  It seems he challenged his brother in law The Marquis of
Donegall to a duel in ​1828 but this was later denied in court.  He died 31 May 1846 at Stillorgan
after a protracted illness and was buried at Stillorgan graveyard.

5          Louisa Dorcas Grady born circa 1805, married Matthew Fitzmaurice Deane by special licence
at Stillorgan castle on 13 Aug 1825 and became Lady Muskerry she died 25 Sep 1846 at Merrion
Square and was buried at  Stillorgan graveyard.  There is a memorial dedicated to her in
St Brigid’s Church.

6          John Hely Hutchinson Deane Grady born 7 Feb 1812, married Helena Richards in Aug 1827
at Gretna Green and was the subject of a bizarre kidnapping.  He died Aug 1843 at Merrion
Square and was buried at Stillorgan graveyard.

7          Olivia Deane Grady, fourth daughter born circa 1815, married the Rt Hon John Skeffington Foster
Skeffington, Viscount Massareene and  eldest son of the Rt Hon Viscount Ferrard and Baron Oriel
at the Deanery House, Raphoe by special Licence on 1 Aug 1835.  Lord Massereene was ill in 1859
and stayed with his brother in law Robert at Maretimo.  Lord Massereene died on 28 Apr 1863, a
fall from an embankment on his estate the previous week had left him paralysed.  Olivia died
​            10 May 1874 at Massereen Lodge, Torquay.

8         Robert Deane Spread Grady born circa 1820 joined the 60th Rifles and attained the rank of
Captain.  He was in Jamaica and Barbados in 1842/43.  He married the wealthy heiress Jemima
Harding, daughter of the late Jonathan Harding, salesmaster of Smithfield and Queens Street on
22 Jun 1844 by special licence at Leeson Street the residence of the bride.  They moved from
Stillorgan Castle to Lismore in 1851 and Robert had resigned his commission by 1858.  They leased
Maretimo as their Dublin residence until 1862.  Robert was the heir of Philip J Holland of Limerick.
Philip was the son of Anne Holland nee Grady, sister of Robert's father died in 1858.  Jemima died
20 Nov 1884 at 77 Pembroke Road and Robert died at the Fulham Road, London on 3 Dec 1890.
​
1           Daughter Grady born 8 Jan 1846, Shelbourne Hotel, died young.

10        Henry Deane Grady youngest son born circa 1816, died Dec 1837 at Ranelagh where he had been
taken for a change of air and was buried at Stillorgan graveyard.