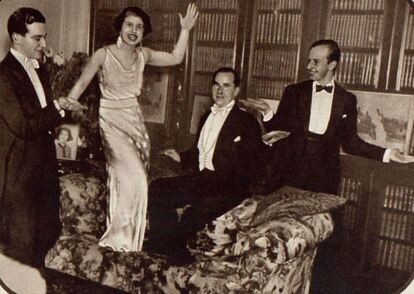 William secondly married Maria Heath Manders second daughter of Edward and Ann Manders, of
Mander’s Terrace.  Dublin on 12 Apr 1855.  They lived at Summer Hill House, Cork.  His brother
Humphreys died in 1877 leaving a widow, daughter Hannah and 40K in personal estate.  William
stood three times for election and was defeated on two occasions.  William died at Summer Hill House
Cork on 8 Dec 1884 and was interred at Douglas Churchyard.  He left 134K in personal estate.  A
stained glass window representing the Good Shepherd was erected to his memory on the east wall of
Taney parish church by his son William. Maria moved to London after the death of William and died
16 Sep 1892 at 62 Warwick Square, Middlesex.

2              William J Goulding born 7 Mar 1856 in Cork He won an international cap for Ireland against
Scotland in 1879. He was the fourth president of the IRFU (1880/1) he attended St John's
College, Cambridge.  In 1876 he travelled to Rome and Greece in the company of Oscar
Wilde and his tutor John Pentland Mahaffy (later provost of Trinity).  He married Ada Stokes
at Bedmarley, Gloucestershire on 23 Feb 1881.  Ada was the only daughter Lingard Stokes of
Murrell’s End.  He returned to Ireland to join the family fertilizer and phosphates firm.  They
lived at Roebuck Hill from 1883 to 1903 with 5 Fitzwilliam Square as their town house, but in
1903 he bought Millicent Demesne in Naas for 12K and Roebuck Hill was rented out.  He was
appointed Deputy Lieutenant for the county of the city of Cork in 1892 and was made Baronet
in 1904.  He died 12 Jul 1925 at Luttrellstown, Clonsilla, Co Dublin.

2              William Lingard Amphlett Goulding 5 Oct 1883 at Roebuck Hill.  He enlisted in the
British army and was a lieutenant with the South Irish Horse and attained the rank of
captain in the 4th Batt, Royal Irish Fusiliers.  He married Nesta Violet Wright on
20 Jun 1908 at Bray Parish Church.  Nesta was the second daughter of Mr Justice
George Wright and grand-daughter of Sir Croker Barrington, 4th baronet, of Glenstal,
Co Limerick.  He was appointed to the board of the Great Northern Railway Company
(Ireland) in 1909. He became the 2nd Baronet on the death of his father.  William died
20 Jun 1935 in London Nesta died in 1968.

1            William Basil (Basil) Goulding born 4 Nov 1909 at 24 Earlsfort Terrace.  He was
educated at Winchester College, and Christ Church, Oxford.  He entered the
family business W & H M Goulding Ltd and succeeded his father as Chairperman
in 1935.  He married Valerie Hamilton Monckton on 28 Aug 1939 at Holy Trinity
Church Milford in Donegal.  Valerie was the daughter of Walter Monckton, 1st
Viscount Monckton of Brenchley and Mary Adelaide Somes Colyer-Ferguson.
They moved to England where they both served during WW2.  Goulding was
commissioned as a pilot in the Royal Air Force and attained the rank of wing
commander.  After the war they returned to Ireland and lived at Dargle Cottage,
Bray where the famous  Goulding Summer House was built by Scott Tallon Walker
architects.  As well as being an astute business man, Basil was as an important art
collector of contemporary art.  Valerie was an Irish campaigner for disabled
people who set up the Central Remedial Clinic in 1951 alongside Kathleen
O'Rourke which is now the largest organisation in Ireland looking after people
with physical disabilities.  She served as a member of Seanad Éireann from 1977
​                                            to 1981.