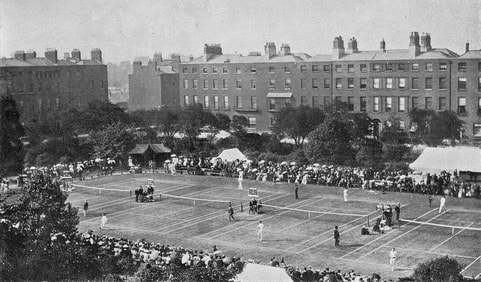 4          Sydney Lawrence Fry, second son born 21 Nov 1871 at 9 Palmerston Road Rathmines
married Emilie Mabel Sampson from Lancashire on 3 Jun 1903 at West Kirby, Cheshire.
Sydney was the Dublin manager with the London & Lancashire Insurance Company.  He
was an International Lawn Tennis player and played until 1913.  He then took on the role
of secretary to the East of Ireland Tournament series which was played at the Pavilion
Gardens in Kingstown.  He was also a swimmer and in 1889 saved a boy from drowning in
the Liffey.  They lived at Herbert Hill from 1920 to 1935.  Sydney died 26 Dec 1935 at
Herbert Hill and was buried at Kilternan.  Emilie died 3 Jun 1946 at Halsten, Richmond
Road and was buried with her husband.

1              Cyril Lawrence Fry born 14 Apr 1905 at Dodder Cottage, Rathfarnham.  As a young
boy was fascinated by the trains that ran along his back garden on the Harcourt
Street line.  Cyril went to boarding school in England.  He helped start a model
railway club at his school.  When he was 17, he became an apprentice and went
on to become an engineer with the Inchicore Railway Works in Dublin.  Cyril
married Nancy McMullen in 1934.  Throughout his working career, he spent his
spare time building over 350 precision made models. His attic was laid out to
accommodate and display them.  The setup included signal lights and level
crossing barriers which all worked automatically.

Often working from original plans from the railway companies to get exact details
and scale.  The wheels and doors were made in their own mould which was filled
with hot metal. Once cooled they were filed into shape on a lathe.  Cyril then hand
painted the model with a small brush to enable a name to be added to the model.
Cyril died in 1972 and his collection of models was purchased by Dublin Regional
Tourism and initially stored in the CIE Works at Inchicore before going on display
at Malahide Castle.
​
At the present time the collection can be seen at the newly restored Casino
cottage in Malahide village.  Cyril Fry will be remembered for his lifelong passion
for trains.

5          Edward Dawson Fry born 12 May 1873 married Esther Maiben Roe on 24 July 1899 at the
Church of the Holy Trinity, Rathmines.  He secondly married Nora Smyth, divorcee and
moved to Greystones.