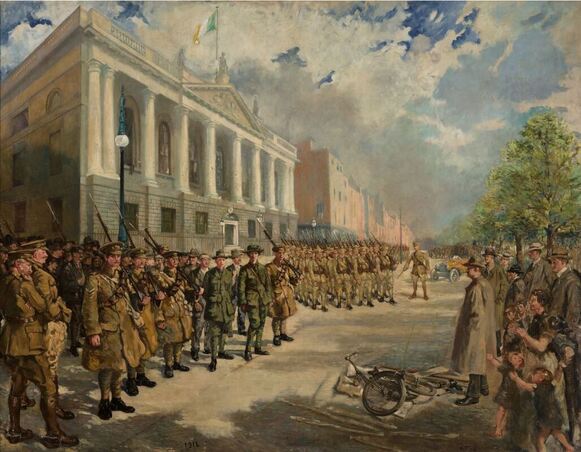 'The arrest' depicting the surrender of Countess Markievicz at the College of Surgeons during the Easter Rising by Kathleen Fox.
Fox Family of Glenageary Hall

The Fox or Sionnach Family thought to have originated in Kilcoursey, Tipperary


1                 Captain Henry Charles Fox born circa 1851.  Henry was an agent for Dundalk Whiskey and of
the King’s Dragoon Guards and married Mary Rebecca Doyle nee Coakley 3rd daughter of
Captain Andrew Coakley, Assistant Commissariat-General of Ceylon on 20.05.1876 at the
Bavarian Chapel, Warwick Street, London.  Mary had previously married John Doyle of 10
Landsdowne Road on 09.09.1870 at the Star of the Sea Chapel in Sandymount.  Henry was
appointed a Government Stockbroker in 1870.  In 1881 the family were living at Cliff House,
Swanscombe, Dartford, Kent. Henry died on 05.01.1902 aged 53 years at Glasthule Lodge,
Adelaide Road, Glenageary.  Mary and her daughters Kathleen and Mary were staying at the
Spa Hotel in Lucan in April 1911.  Mary died on 10.03.1924 aged 77 years at Brookfield,
Milltown.

1             Charles Vincent Fox eldest son born 30.12.1877 at 10 Landsdowne Road attended
Clongowes Wood College and Oxford and was gazetted in 1900 and joined the Scots
Guards. He played cricket, football, polo and was considered a first class yachtsman.
He won the Diamond Sculls at Henley in 1901.  He attained the Rank of Major Colonel
and was awarded the DSO and retired in 1927.  Charles died unmarried on 08.11.1928
aged 50 years at Brookfield, Richmond Road.  After his death the Diamond Sculls Trophy
was presented to the Dublin Boat Club (DUBC) by his sister Kathleen.

4              Kathleen Fox born 12.09.1881 at Cliffhouse, Greenhithe near Dartford in Kent. Kathleen
grew up at Glenageary Hall and entered the Dublin Metropolitian School of Art in 1903
studying under Sir William Orpen and allso worked as his assistant.  In 1908, she won a
gold medal for her enamelled cup 'Going to the Feast'.  Kathleen received accolades for
her stained-glass work including her St Tobias in St Joseph's Church, Glenageary.  One of her
most famous paintings is 'The arrest'  into which she paints herself (woman with straw hat
peering out from under the trees).  It is thought that Kathleen married Cyril Pym in 1917 who
was killed in action in 1917.  She inherited the family home of her aunt Lizzie Lydia MacNally
nee Coakley, which was Brookfield on Richmond Road, Milltown.  Kathleen died on
17.08.1963 aged 83 years.

1               Joan A Theresa Fox Pym born circa 1918 in Croydon, Surrey studied at the Royal
Irish Academy of Music and was considered a natural Soprano.