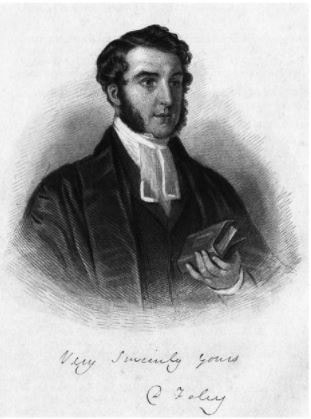 
Daniel Foley son of Timothy Foley was born in Cork circa 1815.  Under the influence of a clergyman
in the neighbourhood he left the Roman Catholic Church and converted to the Church of Ireland.
He attended Trinity and graduated BA and took Holy orders.  Daniel was appointed curate to
Dunhill and Guilcagh, Co Waterford in 1842 and to Clonmel as curate and Chaplin to the Clonmel
Union in 1846.  He married Eleanor Backas Hemphill eldest daughter of Samuel Hemphill MD of
Springhill, Tipperary in 1850.  He tendered his resignation to the Clonmel Union in 1850 and was
appointed Chaplain to Lord Donoughmore.

Irish was his native tongue and he was appointed Professor of Irish to Trinity College in 1852, an
office he held until 1861. The same year he was appointed to the Prebend of Kilbragh and was
Rector of Templetuohy, Cashel.  In 1857 he went to America and published a book The People &
Institutions the United States of America:a Summer Vacation Tour, and in 1858 he was conferred
with his Doctorate of Divinity.

He was described as a large man, firmly built who was a powerful and eloquent preacher and was a
member of The Irish Society (A Society for Promoting the Education and Religious Instruction of the
Native Irish through Irish).  He was an ardent supporter of the evangelical moment and his
sermons were controversial.  He believed that the Protestant faith was the ancient faith and that
Roman Catholicism only evolved after the Council of Trent in 1564.  This he preached on the basis
that The Creed was changed on this day and Protestants still used the older Apostle's Creed.  He
preached that Catholics were being defrauded by their priests who collected money to get out of
purgatory as there was no Purgatory and no Limbo only Heaven and Hell.