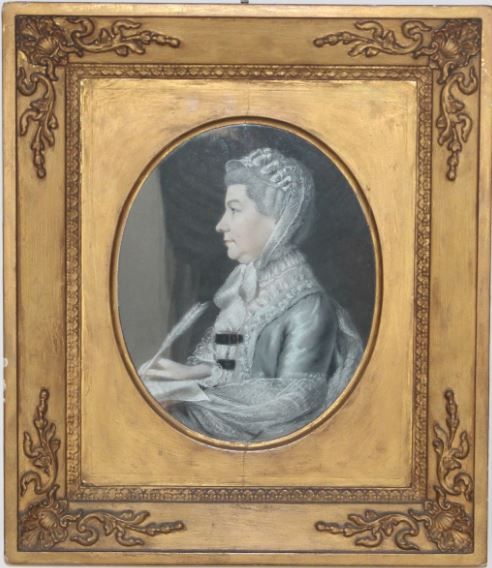 2         William Fitzmaurice married Mrs Leeson in 1730 but the marriage was found to be
bigamous.  He secondly married Lady Gertrude Lambart, daughter of Robert
Lambart, Earl of Cavan in 1738.  William became the 2nd Earl of Kerry in 1741 and
died in 1747.  Gertrude, Countess Dowager of Kerry secondly married James Tilson
in 1750.

3        Arbella Fitzmaurice, second daughter 1707 born at Kerry House, Stephen's Green in
1707 to Thomas Fitzmaurice, subsequently the 1st Earl of Kerry and Anne Petty, only
daughter of Elizabeth Waller and Sir William Petty who compiled what is known as the
Down Survey of Ireland; a detailed land survey that sought to measure all the land to
be forfeited by the Catholic Irish in order to facilitate its redistribution after Cromwell
to Merchant Adventurers and English soldiers.

She married Colonel Arthur Denny, MP for Kerry on 26 Aug 1725.  Arthur was the son
of Edward Denny and Lady Letitia Coningsby, and the grandson of the Earl of
Coningsby, he graduated Trinity in 1720.  The couple lived at Tralee Castle but kept
apartments at Lixnaw, the home of her family.  She fitted out a small outhouse on the
grounds as an apothecary's shop where she administered remedies to the poor.  Arthur
died of apoplexy on 28 Apr 1741 whilst Arbella was recuperating after an illness at
Kerry House with her brother John and his wife Mary.  She was not made aware of his
death until nearly three weeks later.  The couple had no children and she was left an
allowance of 1000 per year by her husband.  In 1745 Arbella leased number 12 St
Stephen's green which was on the corner with Dawson Street.  Katherine Fitzmaurice
came to live with her in 1749, she was the daughter of her cousin Harman Fitzmaurice
and Arbella referred to her as her adopted daughter.  In 1751 her uncle, Lord
Shelbourne died leaving her 500 a year in his Will.  Arbella free of a husband,
entertained and was entertained and life became a round of parties.  In 1751 she took a
journey to German to a spa and visited Antwerp and then on to London to stay with her
​          brother John.

In April 1754 she leased a plot and a two storey, five bay house two bedroom house as a
seaside retreat which she named Peafield Cliff House from William Metcalf.  Metcalf, a
merchant and brewer from Stillorgan had a lease from Lord Fitzwilliam on four acres
on which he had to build 5 houses, he also sold a house beside Lady Arbella's to
James Henry who was married to Mary Fitzmaurice, a second cousin of Lady Arbella and
together they designed the gardens of the two houses.  Anne Fitzmaurice, daughter of
her brother William came to live with Arbella in 1755 after being made a ward of court
and Arbella set about extending the house.

A grim report published by the House of Commons on conditions in the Dublin workhouse
(including The Foundling hospital, now the site of St James' Hospital) in 1758 seems to act
as a catalyst and Arbella wrote to the governors offering to put a team of ladies in place
to supervise and oversee The Foundling Hospital.  Her idea was accepted and by 1760 the
death rate at the hospital fell from over 90% to just over 20% which was considered the
normal infant mortality rate of the time.  This was done by way of clean air, engaging wet
nurses personally, feeding spoonfed babies small amounts every 20 minutes, for which
she commissioned an alarm clock.  Her adopted daughter invented a bottle with a teat to
feed infants.

Arbella was involved in countless philanthropic projects including founding the Magdalen
Asylum for Protestant Girls in Leeson Street in 1765. She promoted Irish agriculture and
industry even breeding silk worms with Emily, Lady Fitzgerald.  She was one of the first
women to be presented with the Freedom of the City.  After an incredibly full
and productive life Arbella died 18 Mar 1792 at Peafield Cliff, which she left to Katherine
Fitzmaurice, her jewellery was left to Anne and her other nieces and nephews.  Her burial
instructions confirm her fear of being buried alive.

'I desire that I may be put in a leaden coffin, and my jugular veins opened, and then enclosed in
an oak coffin, and conveyed to the Church of Tralee, on a hearse with but one mourning coach.
Two servants and the driver of each carriage to be allowed their expenses on the road, the
servants 4/4 and the drivers 2/8 per day, for fourteen days only, being  full time for their return.’

4         John Fitzmaurice was educated at Westminster School and was called to the bar in
London in 1732.  He married his cousin Mary Fitzmaurice.  On the death of his
father he was given Kerry House.  John died in 1771.