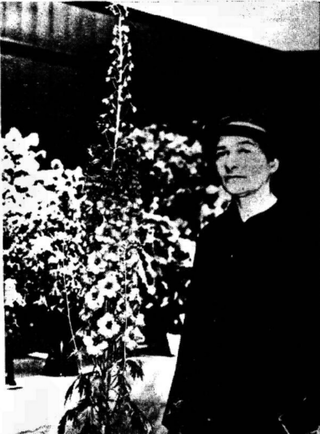 John Dwyer, a spirit merchant with a shop on Main Street, Thurles was the son of Patrick Dwyer a farmer
from Thurles.  He married Anne Belinda Dunne, the daughter of Michael Dunne, a farmer, at
Mountmellick on 28 Apr 1879.  John was a Franciscan Tertiary, and retired to Rathcoole in Co Dublin to
farm in the early 1900's.  The had nine children but three died young.  The family moved to Kilmacud
House in 1920.  John died in 1931 and Anne in 1938 at Kilmacud House, both are buried in Deansgrange.
​Anne left 2K in personal estate.

1             Patrick Joseph O'Dwyer born 8 May 1880 at Main Street Thurles joined the British Army and
attain the rank of Lieutenant Colonel with the Royal Army Medical Corps.  He married Amy
Geraldine Hendriks in Kingston, Jamaica on 23 Jul 1925.  Amy was the daughter of John Hendriks.
​               They lived at Kilmacud House until 1949.
Patrick was a keen gardener and a regular winner at the Royal Horticultural Society competitions
particularly for delphiniums.  Patrick died at 69 Park Avenue, Sandymount on 28 Feb 1955 and left
17K in personal estate in the UK.  Amy died at 69 Park Avenue on 17 Dec 1978 and left 2K in
personal estate in the UK.  Both are buried at Deansgrange.

5             Michael Dwyer corn circa 1892 in Tipperary married Mary Lee, a teacher on 30 Nov 1916 at St
James' Church, Dublin.  She was the daughter of James Lee, a farmer.  Michael had been working
as a grocer and living at Brittas but had just bought a 109 acre farm called Newton Park two miles
outside Wicklow.  On 21 Oct 1920 when driving his motorcycle and side car, his vehicle was hit by
a military lorry at Saggart and he was killed.  His passenger, the Rev John M Clarke from Kilbride,
survived the accident.  The Coroners Court returned a verdict of reckless driving against the
military.  Michael's funeral mass was held in Stillorgan, and he was buried at Deansgrange.