William Deverell eldest son of the late Robert G Deverell of Tullamore married Ada Kate Statter Carr
only daughter of Edward Statter Carr, solicitor of 23 Redcliffe Gardens, Kensington in 1892.  William
was Clerk of the Crown and Peace for Wicklow.  They lived at Rockville, Dundrum before moving to
Greystones.  William died in 1934 and left 8K in personal estate.

2                        Averil Catherine Slatter Deverell, barrister at law born 02.01.1893 at 26 Leeson Park.
She attended the French School in Bray and was presented at court by her mother
during the visit of King George V and Queen Mary to Ireland in July 1911.  She
graduated Trinity College and was awarded a law degree in 1915.  She served as an
ambulance driver in France and Flanders in 1918 with the Red Cross.  She also
clocked up 338 hours at the Red Cross depot in Greystones.  She was called to the bar
in 1921.  With her first earnings she bought a cairn terrier.  She was a dog breeder/
fancier and referred to her home as the Brehon Kennels.  She won numerous prizes at
shows including the Stillorgan dog show in 1965, and was much in demand as a judge
of terriers.  Averil became known as the 'Mother of the Bar'.  Although she was not the
first woman to be called to the bar, she was the first woman ever to practice in Ireland
or Britain.  She died 11.02.1979 aged 86 years and was buried at Redford cemetery,
Greystones with her parents. 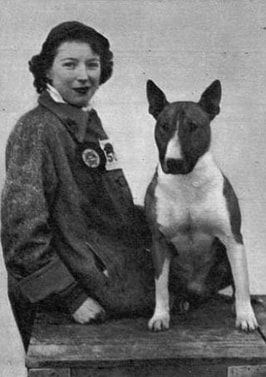 Averil with Ch Guynach Rusticus in 1954