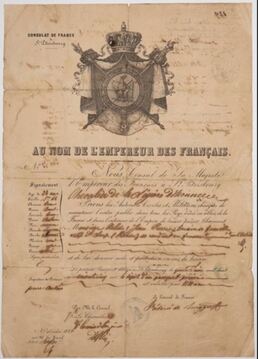 (RUSSIA) ST PETERSBURG on June 4, 1865. PASSPORT issued by the Consul of His Majesty the Emperor NAPOLEON III, in ST PETERSBURG for Mr. AULIER, going to France through Austria signed by Frederic for sale through Bibliorare Association. https://www.bibliorare.com/lot/253743/
de Burggraff family

1              Ludovici Frédéric De Burggraff born in Auch, France in 1817. He married Mlle Charlotte Alix de
Maupas, daughter of Pierre Jacques Marie de Maupas and Marie Charlotte Antoinette de
Tarteron de Montiers, in Paris on 1 Jun 1854.  Maria’s father was in the French Army and was
Conseiller de Prefecture de la Seine.  He died in Paris in April 1858.  He was appointed Consul in
1854 following his being acting Consul since 1848.  They lived at Elm Grove, Blackrock in 1855 and
1856 and moved to Hamilton Cottage in 1857 before moving to Rathmines by 1861. Frederic
arranged for funding from the French Government to help have Irish stock exhibited at the Great
Cattle Show, held in Paris in 1855.  In 1856 he was made an honorary member of the RDS and
decorated with the Cross of the Legion of Honour by Napoleon III, President of France.  The family
had two dogs (setters) called Juno and Astore.  In 1860 Henri Robbet, a Frenchman and a Roman
Catholic was a patient in the Adelaide Hospital for poor protestants.  He requested a Catholic priest
but none were allowed to visit under their rules.  The French Consul removed the patient to St
Vincent’s Hospital and condemned the regulation ‘No emissary or official of the Church of Rome
shall ever be permitted to cross the threshold of the Adelaide hospital for the purpose of
administering a rite … or instruction to a patient’, as being uncharitable.  It was 25 years before
this rule was relaxed.  In 1863 Frederic was posted as Consul to St Petersburg in Russia and died
​                10 Jun 1884.
​
1           Marie Mathelde Burgraff born 19 May 1855 at Elmgrove baptised at Blackrock.