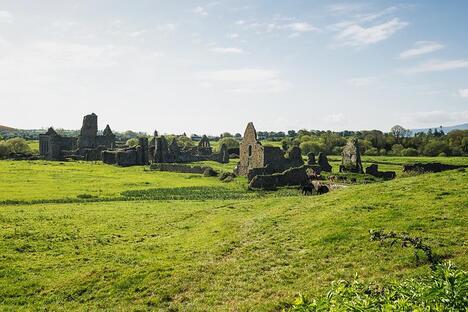 The Daltons lived at Athasselabbey House near Golden in Co Tipperary and the old ruined Abbey was
on their land.
​
Athassel Abbey, built in the 12th Century, was the most impressive achievement of the Augustinians.
One of the country's most extensive monasteries, it covers nearly four acres.  The church is dedicated
to St Edmund, King and Martyr.  It was founded by William Fitz-Aldhelm de Burgho.  The priory was
burnt twice, firstly in 1329 by Brian King of Thomond and secondly in 1581 by John Fitzgerald of
Desmond.  A large town had grown up around the priory but was destroyed during the two raids of
which no trace remains.  The Abbey was finally dissolved in 1537 and the lands given to Thomas Butler,
10th Earl of Ormond who neglected the abbey and it subsequently fell into ruin.

William was a farmer and Roman Catholic and listed under local gentry in the Tipperary
directory living at Abbey House, Athassel Abbey.  The family had a servant called Betty Craddock
who died 5 Jan 1861 age 107 having worked for them for more than 40 years.  The family leased 159
acres at Athassel and another 269 north of Kilfeacle at Mogh.  This part of the farm was managed by
Ned Hogan and Johanna Hogan, siblings who emigrated to Australia who worked for William Dalton.
Athasselabbey House is still extant and faces out out over the ruined abbey.  William was a member
of the grand jury from 1860 - 1866.

Williams brother Rev John Dalton was appointed parish priest of Newport, Tipperary in 1844, prior to
that he was Parish Priest of Ballinhinch from 1836.  He was very vocal on National Repeal.  He died
February 1848, his death was reported as being due to his mental and physical exertions during
famine seasons.  William died in October 1867 and was buried in the family vault in the shadow of the
Abbey.  Eliza died 18 Apr 1874,  William Dalton the informant.

1       Edward Dalton born, eldest son born circa 1822 passed his examinations with distinction in
1843, and was elected a member of the College of Surgeons.  He died from a fever contracted
when working at the local workhouse in January 1848.

5       William Dalton born circa 1830 married Elizabeth.  He address is given as  Canada in September
1874 when his son William was married.

1         William Dalton, born circa 1851 in Co Tipperary, a farmer married Margaret Blackmore, the
daughter of the late Charles Blackmore and Margaret Power of Rathcoole House and
Mortlestown Castle on 29 Sep 1874 at the Pro Cathedral, Dublin.  William was a powerful
swimmer and won a competitions held on the Suir in 1878 and a Salmon fishing competition in
1872 and 1878.  In 1885 he owed over one years rent (over £250) to the landowner Rev Francis
Green.  William was living in Athassel in 1894 but no longer had a fishing licence for the Suir.
William and Margaret are recorded as living in Athasselabbey on the 1901 census.  Margaret
died at Abbey on 15 Apr 1906 aged 58 her husband William the informant.  William died at
Golden on 26 Nov 1912, his son Charles the informant.

4             Charles D'Alton 2 Jul 1884 at Athassel staying with his uncle Charles Blackmore at
Mortlestown in 1901.  Charles married Kathleen Redmond on 19 Jun 1928 at the
University Church, Dublin.  Witness: Charles Blackmore.  Kathleen was the daughter
of the late James Redmond of Clongrennane and Ballyredmond, Clonegal.

5             Elizabeth (Lily) D'Alton married Daniel J Harty at The Church of the Holy Name in
Rathmines on the 27 Jun 1911.  Elizabeth was resident at 81 Palmerston Road and
Daniel was a medical doctor of Blueball, Tullamore, and the the son of John Harty, a
merchant and JP of Nenagh.  Daniel died at sea on 8 Jun 1918 aged 35.

Elizabeth secondly married Edward Roche on 17 Jan 1923 at The Church of the Holy
Name, Rathmines.  Edward was of Kilkea House, Fenagh, Co Carlow and died at his
residence on 9 May 1939.  Elizabeth put Kilkea House up for sale in 1950.

6        James Dalton married Margaret Mary Nolan the eldest daughter of Anthony Nolan,
a Town Councillor of Nenagh on 13 Oct 1858 at Nenagh.  He was on the Grand Jury in
1859 and moved to America after that time.

7        John Dalton moved to America returned to Ireland and the immigrated to Australia
in 1854.