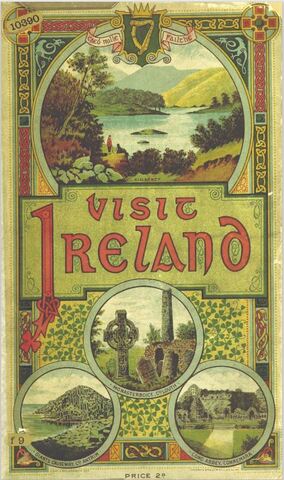 Frederick William Crossley born to Samuel Crossley, an artist circa 1863 at Birmingham England.  He
married Florence Angela Callow at St Mary’s Roman Catholic Church, Holyhead, Anglesey on
29 Dec 1897.  Florence was the daughter of Robert Callow and Mary Doyle of St Pancras, Harold’s Cross.
He was presented with a silver tea service and a gold watch by Ulick Henry Bourke, 9th Earl of Mayo on
the occasion of his marriage.  Frederick lived at Glenheather, Howth and his occupation was a
publisher.  He later worked for the Shannon Development Company having previously worked for
Messrs Thomas Cook & Son.  He founded the Irish Tourist Development Association in 1891 and
published the Irish Tourist, an illustrated guide to Ireland.  The journal contained photographs of beauty
spots around Ireland and was sold for 2d through his publishing company and the railways.  He also
penned Visit Ireland: A Concise, Descriptive, and Illustrated Guide to Ireland in 1900. His interest was in
developing the resources of Ireland as a country for tourists and he worked hand in hand with railway and
shipping companies, hotel proprietors, angling, rifle and golf clubs, and promoted events such as the Horse
Show.  He pushed government and councils to improve public facilities and encouraged hoteliers to
upgrade services and railway companies to open new routes.  But he had his detractors; people who thought
Ireland would be overrun by foreigners and those who didn’t want Ireland portrayed as a modern country
with great transport links, instead preferring to see Ireland as the land of fairies and leprechauns.  He also
had a very public row with William James Pirrie, managing director of the Harland & Wolff shipyard in
Belfast who thought more effort should be put into industry where jobs would be more dependable
rather than that of the unpredictable tourist business.

After an unfortunate mention in a journal of the lack of hospitality to Englishmen and that foreigners like
Cardinal Vincenzo Vannutelli, as a sleek Italian were preferred by the Irish hooligans, he came into conflict
with the Gaelic League who saw him as an Englishman exploiting the tourist industry in this country for
years to his own great ​advantage.  However it is unlikely that this editorial was written by Frederick, he
always stated that as a Protestant and Englishman, he was grateful for the support, kindness and help that
he had always received from his many Catholic friends.

They lived at Glenheather, Howth until 1910 when the moved to St Clouds on Avoca Avenue and changed
the name of the house to Glenheather.  He was a hotel proprietor and a director of the Cork & Bandon
Railway Company.  During the war years Frederick wrote songs, penned plays and hoped that once the
war was over, that Ireland would be well placed to welcome visitors as the rest of Europe would be in
terrible state.  He was involved in the Free State Commission and the Irish Tourist Association were given
an office at Piccadilly House in Jermyn Street.  They moved to Sandymount before moving to Foxrock.
Florence died 17 Nov 1943 at Mazemore, Foxrock.  Frederick died at Mazemore, Torquay Road on
23 Jul 1950.  His Funeral Mass  was held at Foxrock and he was buried at Deansgrange.  His headstone is
inscribed ‘Father ​of Irish Tourism’.

1           Frederick Samuel Crossley born 26 Oct 1898 at Glenheather, Howth.  Frederick joined the air corps
and was an aviation officer based at Baldonnell when he married Stella Josephine Baker at Lucan on
23 Aug 1922.  Stella was resident at the Spa Hotel Lucan and was the daughter of Major Robert
Baker of the Royal Dublin Fusiliers.  He designed a new type of shallow draught barge which he
patented in 1923.  He took part in airshows undertook stunts and took aerial photographs in his De
Havilland 9.  Frederick was Chief Technical Officer when he retired in 1928.  He was a founder
member and instructor of the Ireland Aero Club.  Captain Frederick Samuel Crossley, was pilot in
charge of the Stanley Park Aerodrome at Blackpool in 1930.

2            Mary Louise (Molly) Crossley born 29 May 1901 at Glenheather, Howth married Alexander Herriott
at St Andrews Church, Westland Row on 28 Apr 1929.  Alexander was a chemist resident in Nenagh
and the son of David Herriott, a chemist.

3            Florence Winifred Crossley born 11 Jul 1902 at Glenheather, Howth married Stephen McGloughlin
at Star of the Sea RC Church, Sandymount on 23 Jan 1933.  Stephen was a civil engineer living at
Clifton Terrace Monkstown and the son of Charles McGloughlin, Civil engineer.  Stephen was on the
council of the Institute of Industrial Research and they lived in Clonskeagh.  He was also chairman
of the family firm J & C McGoughlin Ltd of Pearse Street.  Stephen died in a traffic accident on
27.08.1962 aged 58 and was buried at Deansgrange.

8            Harold Mayo Crossley born 17 Oct 1909 at Glenheather, Howth.  Harold married Xenia de
Baschkirow at Rathfarnham RC Church on 20 Jan 1937.  Xenia was the daughter of Alexis de
Baschkirow, an army officer and was resident at the Loretto Covent working as a clerk at the time of
her marriage.  Xenia died at Ashbrook, Ranelagh on 1 Jan 1950 aged 34 and was buried at
Deansgrange.