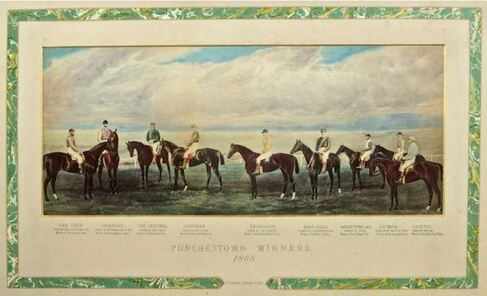 A HAND COLOURED PHOTOGRAPHIC PRINT depicting the Punchestown winners from 1868, published by Thomas Cranfield, Dublin Auctioned by Adams in 2013
Cranfield family of Airfield


In 1753, Dr Richard Russell published The Use of Sea Water which recommended the
use of seawater for healing various diseases.  Circa 1790 Richard Cranfield opened
sea baths between Sandymount and Irishtown and by 1806 was also offering tepid
baths.   Originally called the Cranfield baths it was trading as the Tritonville baths by
1806.  Richard Cranfield born circa 1731 died in 1809 at Tritonville Lodge outliving
his wife by four years to whom he had been married for over 60 years.  He was a
sculptor and a carver of wood and had a share in the exhibition Hall in William Street
which was put up for sale after his death.  He was also the treasurer for the Society of
Artists in Ireland.  He worked at Carton House and Trinity College.  His son Richard
took over the baths.

1            Richard Cranfield late of Tritonville Baths died 24 Dec 1859 (Executors William
Cranfield and Thomas Cranfield of Airfield).  In 1828 Richard was advertising
the cleanliness of the baths which had the water changed twice daily.  In 1846
there were unusually high tides in Dublin and the seawall at Sandymount was
breached causing huge damage to the coastline and the baths.  The same night a
barge moored on the Dodder floated out to sea, houses were flooded and the
inhabitants evacuated.

1          Thomas Cranfield married Anne Keys in 1839.   Thomas was a stationer and
printer of 23 Westmorland Street.  In 1847 he became the first mezzotint
printer in Ireland producing copies of a works by Irish artists such as
William Brocas.  He received an award from the RDS for his print from a
portrait of the Earl of Clarendon.  He moved to 115 Grafton Street and
received a Royal Warrant in 1850.  The family moved to Airfield in 1854.
Thomas was also an agent for the London Stereoscopic company and
moved into photography.  He disposed of his business in 1878 to his son
and his assistant George Nutter.  Thomas moved to England in 1882 after
the death of his son Charles.  He died on 5 Jun 1891 at Melrose Netherhall
Gardens, Hampstead, London aged 77 with £90 in personal estate.