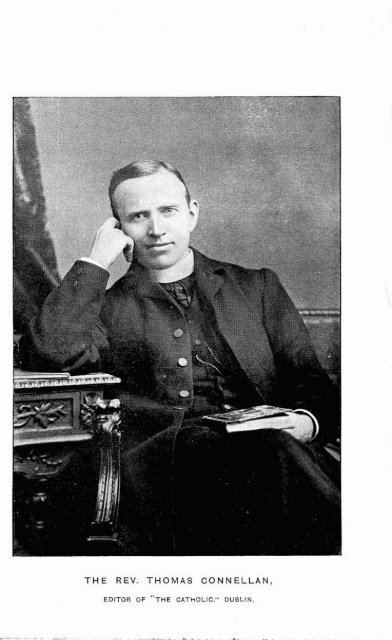 James Connellan born circa 1814 was a farmer.  He married Honora and died 21 Feb 1896 at
Riverstown, Geevagh, Sligo.

2               Maria Connellan born circa 1857 in Sligo married William Tallant, a shopkeeper from
Ballyfarnon on 15 Oct 1877 at Geevagh Church, Boyle, Co Sligo.  William was the son of
Peter Tallant, merchant and by 1886 had a hotel at Albert Street.  Maria ended up in dispute
with her husband after her brother Thomas was excommunicated in 1889.  William moved
to Albert Street in Sligo and applied for a writ of Habeas Corpus to gain custody of the
children as he feared they would not be brought up Roman Catholic, if they resided with his
wife.  Maria a widow living with her brother Tom at Elm Grove died 17 Jan 1917 from
Influenza.

On the 20 Sep 1887, he went to a boat on the Shannon, changed into civvies, left his clerical
clothes on board and took a train from Moate to Dublin. The following day he took a boat to
England.  He got a job as a sub editor on a London Newspaper.  The newspapers reported
his death and that his gold watch, chain and his purse were missing, presumed stolen.  The
weekly meeting of the Athlone Town commissioners was adjourned and Lough Rea was
dredged to see if his remains could be found. His story was the inspiration for George
Moore’s novel ‘The Lake’.

On 25 Mar 1889 he arrived home, having converted to Protestantism.  He was welcomed by
his family but the Parish Priest called to the family home and told his family to disown him
and he was denounced from the altar.  On refusal to resume his duties as a priest, he was
excommunicated by Bishop of Elphin, Lawrence Gillhooly.
​
Although Protestant, he was not affiliated to any protestant denomination but was granted a
preacher's licence in 1897 by the Church of Ireland Archbishop William Conyngham Plunket.
He published Religious Tracts including; Hear the other side, The real Needs of Ireland, The
Power of the Gospel  and The Seal of Confession.  He also published and edited a monthly
magazine ‘The Catholic’ from January 1891 until his death.  In 1894 he was brought to court
by Margaret Monaghan claiming maintenance for her child but it was not proved that Thomas
was the father.  He was living at 135 Strand Road, Merrion in 1892 and by 1896 he had a
mission at Dawson Street which he opened with the help of his brother Joseph.  He lived at
Elm Grove, Blackrock from 1901 to 1917.  Thomas died 11 Jan 1917 from pneumonia at Elm
Grove.  He left 1K in personal estate and his executor was his brother Rev Joseph Connellan.
Thomas gets a mention in Ulysses, when Bloom reflects when walking down Dawson street
that 'pauper children were once given soup to convert'.

6                Joseph Connellan born circa 1864 at Sligo converted and helped his brother set up the
Connellan Mission.  He married Helen Mary Begley on 8 Aug 1898 at St Stephen’s Church.
Helen was the daughter of John Begley, a missionary and his wife Margaret.  Joseph worked
as a journalist.  Helen died 22 Nov 1904 aged 31 and was buried at Mount Jerome.  John
secondly married Jane Bowers on 14 Dec 1909 at Rathfarnham Parish Church.  He took Holy
orders and was based in Durham.  He returned to Dublin in 1915 and was appointed
incumbent of the Molyneux Church in Bride Street and later to Galway and Newport.  Joseph
died 24 Jun 1927 and Jane died 13 Jan 1969. Both are buried at Mt Jerome.