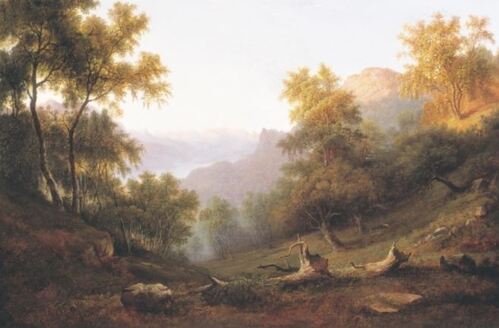 George Thomas Colomb born circa 1789 is thought to have been the son of Philippe Colomb
& Elizabeth Burtchell.  He was an ensign in the army in 1808, and attained the rank of Colonel
in 1866.  He married Mary King, third daughter of Abraham Bradley King of Bloomsbury on
31 Aug 1820 at Monkstown Church.  He was appointed Commandant of the Royal Hibernian
School and moved from Dunstaffnage to the Phoenix Park in 1843.  He retired from the school
in 1858 on attaining the rank of Major General and moved to Ulverton Lodge in Dalkey.

He was a former pupil of the RDS drawing school and was elected a life member of the RDS
in 1841, his proposers were Sir William Betham and Isaac Weld.   He was a frequent exhibitor at
the Royal Hibernian Academy from 1841.  He sold the contents of his house in 1843.  Items
which remained unsold were auctioned in 1845 by John Littledale of Ormond Quay.  The sale
included some 600 books, paintings and his collection of fossils, precious stones and minerals.

George and Mary were regular attendees at balls held at The Viceregal Lodge and The
Castle.   Mary died aged 66 on 25 Feb 1866 and George died 20 Mar 1875 at Dalkey.

2            George Halton Colomb, eldest son was at the Royal Military Academy in 1845.  He
attained the rank of colonel with the Royal Artillery. He was a competent amateur
painter and exhibited at the Royal Hibernian Academy.  He died on 30 May 1910 at his
residence in London.

5          John Charles Ready, fourth son born May 1838 attended the Royal Naval College.  He
entered the Royal Marine Artillery and retired with the rank of Captain.  He married Emily
Anne Palmer daughter of R S Palmer on 1 Jun 1866 at St Mary’s, Fulham.  Emily was the
widow of Charles Augustus Paget, RN.   John was the owner of 4500 acres at
Dromquinnin, Kenmare which came from his wife’s family.  He was a JP for Kerry and MP
for Tower Hamlets in 1882.  Sir John died at his London residence on 27 May 1909.