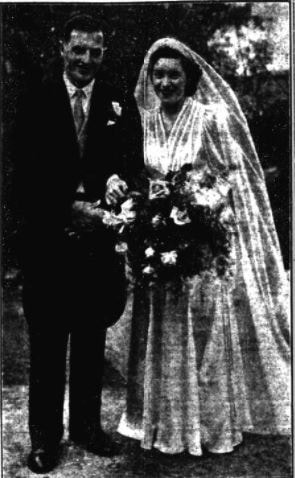 James Coghlan born circa 1881 son of Edward Coghlan, a farmer married Cecelia O’Reilly at St Kevin’s
Church, Dublin on 11 Jan 1911.  James was a commercial traveller based in Limerick between 1911 and
1914 and was in Dublin by 1919, by which time they were using the Irish versions of their names.  Shelia
originally from Dunmoe Lodge in Navan, was the daughter of Edward O’Reilly, a grazier and Anne Shiel.
Sheila was involved in the Independence Movement and a member of the Gaelic League.  She taught Irish
at St Enda’s College when Padraig Pearse was headmaster.  It appears that James was a clothier agent with
premises at South William Street.  Sheila died on 20 Nov 1962 and was buried at Deansgrange.  The wife of
the President, Mrs de Valera, and Mr de Valera's aide-de-camp, Colonel Sean Brennan were among the
attendance at her funeral in Blackrock.  James died 8 Jun 1976 and was buried with is wife.

4             Sighle Ni Cochlain born 15 Jul 1915 at Alpine Villas, Limerick. Sheila Coghlan married Dr John M
Hickey on 16 Sep 1941 at Blackrock RC Church.  The reception was held at Elm Grove.  John was a
medical doctor resident at Dungannon and the son of Garret A Hickey MD of New Ross, Co
Wexford. He was medical officer stationed at Dungannon prior to his marriage and also a director
of Patrick Hickey Ltd of New Ross, a department store established in 1770.
​
5             Daughter Coghlan joined the Carmelite sisters taking the name Sister M John.