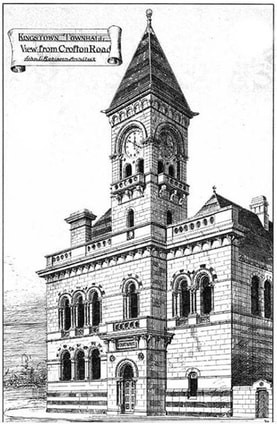 John Chancellor born circa 1837 son of George William Chancellor*, watch and clockmaker and
his wife Mary Anne Steele and grandson of John Chancellor of Bishopsgate, London**.  His father
died in 1862 and he took over the business at Sackville Street.  He married Lillias Smith, eldest
daughter of James Smith, coalmaster of Rosebank Dalserf at 29 Apsley Place, Hutchesontown,
Glasgow on 12 Oct 1865.  John was a JP, jeweller and photographer by 1861 they were also
practical opticians, retailing and hiring race and opera glasses.  John died 12 Mar 1890 at
Craiglands, Dalkey and left 8K in personal estate.  He was buried at Mount Jerome with his father.

After the death of her husband, Lily took an active interest in the extensive business carried out
at 55 Lower Sackville Street and from 1923 at 7 Grafton Street.  Lilly died at 115 Rathgar Road on
17 May 1924 aged 81.

3             John William Chancellor 23 Jun 1870 at 8 Charleville Road, Rathmines married Cecily
Granger on 21 Jun 1904 at Downham, Essex.  Cecily was the daughter of Lieutenant
Colonel Harry Thomas Granger.  Their business was registered with the Dublin Assay
Office in 1895 and their mark was 'C & S' within an oblong punch with clipped corners.
John was a jeweller and resident at Beechlands, Shankhill at the time of his marriage.  He
was a member of the Goldsmith’s Corporation of Ireland in 1923 and traded as John
Chancellor and son from 7 Grafton Street.  In 1937 his business was acquired as a going
concern and a limited company set up called Chancellor and Son.  John died 7 Feb 1949
at Harolden Road, Dublin and was buried at Mount Jerome.  Cecily died in 1954 aged 73
at the Adelaide Hospital.

4            Lily Elizabeth Helen Chancellor born 21 Dec 1871 at 8 Charleville Road, Rathmines
married widower Edward Arthur Armstrong on 31 Aug 1904 at Rathmichael.  Lily was
resident at Beechlands, Shankhill at the time of her marriage and Edward was the son
of Richard Armstrong.

6            Henry Steward Chancellor born 26 Oct 1874 at Sea Bank, Glasthule.  Henry was a
photographer and artist. He attended the Dublin School of Art and later the Slade School
in London.  He died from TB 21 Jun 1907 at Altidore and was buried at Mount Jerome.

**         John Chancellor, watch maker came to Dublin in 1802 from 81 Bishopsgate, With-out in London.
He traded from 35 New Sackville Street and made watches for the guards on the Bianconi
coaches and in 1811 patented a musical clock (No 3487). He also patented an escapement and
a musical leaf turner in 1818.  Joseph York Hatton, later of London Bridge was one of his
apprentices in Bishopsgate in 1790.  He installed the clock at St Patrick’s Maynooth in 1809
He had the patronage of the Lord Lieutenant and Countess Talbot and was appointed 'Watch
and Clock Maker &e to his Excellency the Duke of Northumberland' in 1829.  In 1831 John
designed a four dial turret clock with rectilinear escapement for the government of the day
and in 1833 another for Johnstown Castle in Wexford.  Others were installed at Kingstown Town
Hall and the RDS at Ballsbridge.